One of the first things 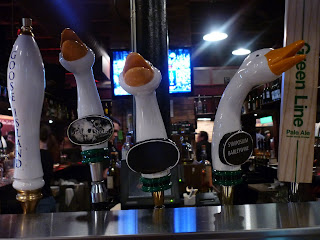 I learned on my Chicago trip was that Goose Island at Clybourn had changed and that I wouldn't like it. Maybe that affected my friends thoughts on the matter, as no trip there was scheduled, but I had liked it a lot last time and thought "What the Hell? I'm giving it a go." Opportunity knocked when the Yankees who didn't fly home on Sunday went to the baseball on the opening day of the season. Now I'd rather scoop my eyes out with a spoon than do that, so Goose Island it was. Again the Chicago Public Transport system was up to the task. It's pretty good, though for some bizarre reason, you can't buy a day ticket from most stations, instead having to go to a convenience store. Just a little tip should you ever go there.

Set in what can best be described as an industrial area, I got there around one in the afternoon to find the place heaving. I found a good spot at the bar though and soon made friends with the young couple next to me. Thanks Becky and Derek. The beer menu was perused and I knew I was in for a good time when I realised there was 24 beers on offer ranging from an English style mild at 3.5% to a mighty Bourbon stout at 13.5%. None seemed more expensive than anywhere else, despite dire warnings to the contrary. Being a sucker for Belgian style wheat, something the Yanks seem to do even better than the Belgians, I started with the Wit which was on the money, but maybe a little too lemony for some. Then via a couple of tasters - as long as you are buying, tasters are no problem and in fact were offered more often than not - to Goose Island IPA, the classic GI beer and just as good as ever. Then to celebrate the new baseball season in the only way I'd be happy doing, by drinking the celebratory Opening Day IPA at 6.4% which though it I didn't like as much as the "ordinary" IPA, was pretty damn good anyway. 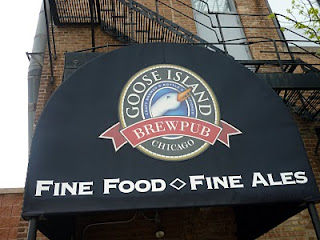 Then the stouts; Maplewood Farm Bacon Stout which was much better than the name suggests, a pint of Blackberry Stout which was an excellently balanced beer and followed by generous tasters of Bourbon Coffee Stout and Bourbon County Imperial Stout - the 13.5% bad boy - both were magnificent, but you wouldn't want a lot of them. I moved down the scale somewhat, by settling back to drink Honkers (cask) and IPA. (As an aside I made a mental comparison with the version brewed in the UK for JDW and from memory they were pretty similar.) Then my civilised visit was over and it was off to the Map Room for a bit of an Alpha King sesh with some cold and wet baseball fans. That was a bit less civilised!

Goose Island Clybourn really does have something for everyone. It is friendly, buzzy, has knowledgeable and attentive staff and good food; it's easy to get to and isn't overpriced by Chicago standards. Oh. And the beer (and company)is pretty damn good too. If you are ever there, don't miss it.

Apologies for this indulgent post, but that's my Chicago trip done with.
Posted by Tandleman at 18:52

Labels: Chicago
Email ThisBlogThis!Share to TwitterShare to FacebookShare to Pinterest

This is a huge draw to make me go to Chicago. I would've gone to Wrigley though - I love baseball!

There seems to be some strange craze in the US with bacon stouts at the moment. I don't quite understand it... Still, beer and bacon go well together, so why not just in the same glass?!

Would you recommend Chicago as a beer city to go to? Could you spend a week there and be entertained with bars, breweries, etc, with some stuff to do during the day?

Thanks for taking the time to write a post about your experience at our pub. Glad to hear you enjoyed yourself, cheers!

Another Brewery in the Chicagoland area that I would recommend would be Two Brothers Brewing in Warrenville. Its about a 30 minute drive from the city depending on the time of day. If you are going during rush hour it could take an hour and a half.

The JDW Honkers was a mighty fine beer

@Mark I don't think they went there but to the other one. As for Chicago, it's a pretty good city with fine museums - so I'm told - a nice park - loads of great eateries - a big fuck off lake and plenty of chicks to gawp at. What with that and the drinking, a week's no problem.

@Goose You are welcome. I enjoyed it a lot.

@Ales You are a Yank aren't you? What visitor would drive to a pub to drink strong beers? Be driven maybe. Train?

Surely "bacon stout" must be a smoked stout, smoked with the wood they use for bacon. Or wtf?

Blackberry stout--now that's something I'd like, depending on how strong it is, or ain't.

IIRC, GI Clybourn is where I ate (stupidly) some dodgy Walleye back in 2003. Have only myself to blame though, for daring to eat walleye at someplace other than a lodge in the country or a VFW hall.

Pity the others weren't along; otherwise I'd like to have asked how many times "it's a Dort!" was said.

Sounds like an awesome place. The honkers was in a cask ... not a keg? Is that done partially to enhance the novelty of it being in the English style you think?

@Chunk: I think it is available in both forms. So you can contrast and compare.

Not that it has anything to do with beer, but it wasn't opening day for baseball, not by several weeks.

Wet and cold it was, however, and probably exactly the weather you'd put up with for the footie. We didn't go to Wrigley because there wasn't any baseball there; Cubs were on the road.

Well I kinda assumed due to the "new" beer in GI.It's just like rounders (a girl's game)anyway, so who gives a fuck.

And rumour has it it, you went for a piss during the only home run and missed it.

No such probs at the boozer.

Forgot to note--you never made it to the $10 hot dog joint? Pity.

I'm jealous! I grew up outside of Chicago, but this was way before the micro revolution. If Goose Island would have been there I probably would have come around to beer a lot earlier than I did. I would love to return for a visit.

I was expecting something like a US style brewpub when I visited Meantime's Old Brewery. Alas.

It was a great visit Allyson. Quite upmarket in some ways, but no white tablecloths and very much a pub if you wanted it to be.

I'll still take a trip to the new Meantime place, but maybe I'll combine it with something else now. It seems to be sending mixed messages about what it is, which is always a shame. It is the inclusive nature of them that makes American and German brewpubs what they are. In the American case the beer is always to the fore. (In Germany it can be samey and poor.) Ho Hum. The search continues. Thanks for your comments.

It's early, so help me follow along. What's wrong with the Meantime place?

What's "inclusive" about German and Yank brewpubs--making you feel welcome?

Well reading what Impy Malting says, it aims at particular segments of the market at particular times. German and American brewpubs don't tend to hence being "inclusive". Simples.

Well she doesn't say what's wrong with the place, just that it wasn't US-brewpub-y.