Two old stories, made new again, are jumping around the web. The first is our old friends Brew Dog are on the earhole again. Having found only £750,000 out of a hoped for £2.3 million in its first go at Equity for Punks, they have whipped up £500,000 in two days in a new scheme. As the last lot was achieved over 5 months, I can only conclude that either the new offer is much better than the last one, or there are a lot of people out there that are prepared to take a punt for a discount on beer and other incentives. Not that I think this kind of fund raising is necessarily a bad thing. I know of one pub company that wanted to borrow a large sum from the bank to refurbish a new acquisition. The bank either hummed and hawed too much, or refused - I can't remember which - and the PubCo went straight to various associates and friends and raised the dosh overnight. Alternative means of raising money aren't new and aren't bad. The respective arguments for and against in the case of Brew Dog are put by Dave Bailey here and Allgates Brewery here. I must say that Allgates make the more persuasive arguments to my mind, but you must make your own up. 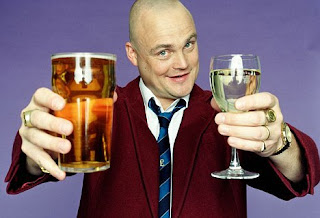 The other old story - I say old, because this kind of thing has been tried before I think - is that Carlsberg and Molson Coors are both releasing beers aimed at women. This has set off the old arguments about whether this is patronising or not and whether most women are perfectly happy to like beer or not on their own terms. As a fanatical believer in equality, I tend to believe women are quite capable of making their own minds up and women who don't drink beer are just people who don't drink beer and therefore a blank canvas in terms of what they might or might not like, but either way, there is certainly an untapped market and we should be attracting more women to try different beers. Makes the pub a nicer place for a start.  So, in short, I empathise with the aim, but it just seems to me that this is unlikely to be the best way to achieve the outcome.  The industry would be far better starting with environment, cleanliness and glassware, than inventing "special" beers for women I'd venture.

So what of the beers? I don't know what they taste like, but there does seem a little stereotyping going on here. That's hard to avoid when you do this kind of thing frankly. Carlsberg say "Many young people aren’t keen on the bitter aftertaste of beer. Here our surveys show that with Copenhagen we have created a highly drinkable beer with a balanced taste — a real alternative to white wine and champagne."  Hmm. Forget the champers, get the Carlsberg out. I don't think so.  I'm guessing too that it will be bland.  Molson Coors has gone for a mixed approach, but seems only marginally less patronising. Animee, from the French word for motivated, is billed as “bloat-resistant” - less gassy and lighter tasting than most beers. It will be available in 275ml bottles in three varieties; standard, rose and citrus.

Whether patronising, or well meaning, will these initiatives fail? In Molson Coors case, despite good intentions, if the internet reaction is anything to go by, likely I fear .  As for Carlsberg? Probably!

"The number of UK women drinking beer in the UK is almost the lowest in the world - we won't change that by just doing what we've always done" Kristy McCready - Molson Coors."   I have a lot of sympathy with this statement.

The reaction we've had from women has been overwhelmingly positive, Animee has been developed with women testing and tasting at every stage and they tell us they love it.

The internet reaction is from people already in love with beer so I completely understand why they don't see the need for it but, as I've said many times, with so few women choosing to drink beer we have to do something different.

We are losing category share to wine and spirits everyday - this could be one of changing that which is good news for all of us. What I'm certain of is that continuing to bury our heads in the sand in the hope that women will discover beer eventually won't earn us our pensions - we need to try something new!!

You are absolutely right environment, cleanliness and glassware all need to be addressed as well and we're looking at all of those things too.

The point about internet reaction is a good one. Also, when the women were given the beer to taste, were they also given a broad range of other beers to compare it with?

We'll see how it pans out, but the aims are, as I say, laudable.

I read Animee, I think:

I wrote about this too, I'm on the side of Dave, but I think Ian makes a well informed, persuasive argument. He has obviously approached it with an open mind, which when it comes to discussing brewdog is something people often aspire to but dont attain.

I've just commented on the same story on Tyson's blog, to the effect that the real ale brewers are partly to blame for allowing the big boys to aim for the market that they have not only neglected, but in some cases actively alienated by using silly names, pumpclips and promotions that are clearly intended for the lads market.

The BrewDog thing'll work out, I'm sure of that. All the negative valuations assume that the company will stop growing right now, which of course it won't. Whether or not you are happy about that is a matter of personal choice. Obviously I'm biased as I'm a share holder.

The women and beer thing I'm immensely interested in. I'm fairly much in agreement that it is important to try and engage more women. Although I'm sceptical of the way Molson Coors are doing it simply because it is a direct attempt to counter their sponsorship of premiership football. A bit like fighting a fire you've started with more fire.

But still, if it has an effect and really does get more women to drink beer then I guess that's OK. After all, if Molson Coors stop all male biased beer promotion someone else will take their place.

I guess in summary it is all very well us trying our best to want gender equality, but the sad fact is very few of either sex live that out in reality.

Third time lucky-I made my point on Tyson's blog
http://tysonsbeerblog.blogspot.com/2011/07/and-what-would-lady-like.html

I have tried Copenhagen, and these are my thoughts:

Avoid, is what I say.

I wonder how many CAMRA members will invest in a company that insults them on a regular basis?

I used to work for a brewery in NZ that did this...

Lots of money spent, lots of development and in the end, they struggled to give it away.

Good luck to them...

If Moulson want to encourage women to drink more beer then they ought to try making beers that women tend to like, rather than the frankly underwhelming range that they currently push. You could say that Blue Moon is a good entry level wheat beer, but do they make a single decent stout ? Or a cracking pale ale ? I have found that these two styles seem to be the most popular amongst women who wouldn't usually try beer otherwise.

Glad you are still reading Penny.

Dave - you couldn't be more wrong.

The launch of Animee is based on our research and understanding of women over the last 2 years - I believe the greatest understanding in our industry.

We're very proud of our association with football over the last 18 years and actually football is one of the occasions when women do drink beer.

Tandie - absolutely, Animee was tested against a wide range of other beers as well as wines, spirits and ciders and women loved it. It has the potential to get more women in to the category - I'm struggling to see why anyone wouldn't think that was a good thing!

Here's what I said on Tyson's blog.

Of course it’s all nonsense and repudiates the whole concept of feminism. The way to make anything inclusive is to do just that. This may require a lot of hard thinking and a fundamental change in attitudes. The approach Molson Coors have adopted is to make the product exclusive. I’m not sure that’s wise and it’s certainly a retrograde step.

Following the logic of Molson Coors, we’d have separate clubs and pubs for women and men, different food etc. Is that what we are really saying about society?

I’m afraid I’m also not impressed with the claim that they interviewed x thousands of women. Numbers themselves are meaningless. The first Kinsey report was acclaimed as the first large scale investigation of sexual behaviour, but now is discredited as being unrepresentative.