Brewers Bollocked in War of the Roses 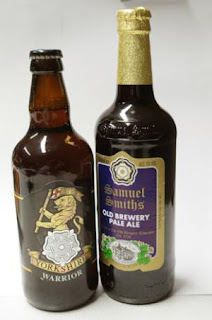 You may have read about a dispute between Cropton Brewery of Yorkshire and the much bigger Sam Smith, the oddball idiosyncratic Tadcaster mob. The dispute was over the use, on a Cropton bottled beer, of a white rose, which the more educated among you may just recognise as the symbol of Yorkshire. So think about that one. Yorkshire brewer uses Yorkshire rose shock horror. Sam's however claim the rose as their trade mark. The nub of the argument runs thus: Cropton claims the rose is the symbol of Yorkshire and there is no reason why it should not use it, but Samuel Smith’s claims it is an infringement of its trademark and confusingly similar to its rose which it has used since the 1960s.

Now the even more anal among you may know that said oddballs, sorry, idiosyncratic brewery, has, for the last umpteen years, been stripping from almost everything, including its pubs and drays (though not its bottled beers admittedly) said cherished trade mark, (the Yorkshire rose.) You may also think that this is one where surely they could have got together and solved this little difference of opinion.  So did the judge, though he did rule in favour of Sam Smith's in the aspect of the disputed beer, though not in the case of another beer, brewed for Marks and Spencer by Cropton.

Mr Justice Arnold said it should have been settled "a long time ago", without the enormous cost of a High Court hearing. He said: "The dispute is one which ought to have been capable of settlement out of court a long time ago. Instead it has grown into a case which is out of all proportion to what is at stake in commercial terms." I can't imagine though, that particular aspect will bother Humphrey Smith who has deep pockets, but it will surely be a needless cost to Cropton.

Yorkshire pride and stubbornness is well reputed. Here it is illustrated. Fun though to the outsider.

I am grateful to the Yorkshire Press who seem to be the only ones arsed to report on this titanic struggle.
Posted by Tandleman at 14:46

Sam Smith refused to apply for the new music licences a few years ago, so there's no music in their pubs. During Whitby folk week, the Plough used to be heaving with people playing & listening to music in three rooms and a large courtyard, weather permitting. Casks ran out very frequently, and they must have made enough in one day to pay for music licences for the entire Sam Smith's estate. Now during folk week, it's almost empty.

If you could put a brewery in a straightjacket, it would be Sam Smith.

Just another case of a bigger brewery bullying a smaller one. Personally I don't see that Sam Smiths 'have the rights' to the Yorkshire rose any more than I have the sole rights to the word Rabid! I think it's disgusting and the Judge ought to be ashamed of themselves. Not sure what 'fun' you see in it thought Pete. Lovibonds went through a similar thing with Diageo and won, so I guess it's big bully boys 1, 'brewers' 1. Ding ding, round three!

Oh, that's a shame. Cropton is a brilliant brewery, we stayed there on my UK trip. And it brings Sam Smith's rep down in my eyes, which is a shame too, as they have some of the nicer UK beers available here in Aus. Mind you, it's not a stupid as the Monteith's "Radler" case happening in NZ - now that's just plain silly. I hope Cropton come out of it OK.

Smiths can bugger off. Especially as they use our esteemed county symbol upside down.

Ah yes, Yorkshire - the place that gave the world the cheery and uplifting Geoffrey Boycott.
Yorkshire people are like the Scots but with all the goodwill squeezed out of them.
How do you know someone is from Yorkshire ? - because they'll tell you within five seconds of meeting them.
A dreadful county populated by whey-faced half-wits.

Someone told me recently that it was after an argument with the Guinness rep on a golf course that Humphrey Smith ordered the brewery to start producing a draught stout.

It's more a case of a larger brewery with VERY deep pockets thinking they own the white rose of Yorkshire. I agree this should have never come to court but spare a thought for Cropton who made a stand against a bully and is left raiding their expansion fund to pay court costs.
I for one will not be drinking Sam Smiths from now on...

Cuthbert Rizla is either a person with a lousy sense of humour or a despicable bigot.

I think , for me, it's not so much Sam Smith's sutbborness that leaves a bad taste, it's - as you say -the willingness to drag this through the courts at some considerable cost to Cropton. I'm no expert, but I fail to see how the rose can be copyrighted, but there you go - it got to court so it must be. 'Brewing Brotherhood' only exists on certain levels, it would seem.
btw - love the Cuthbert Rizla comments....