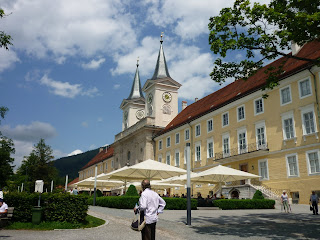 For years now we have sold Tegernsee Spezial at the Great British Beer Festival.   As a consequence, each time I go to southern Germany, I promise myself I'll go there, to the source, to see the place for myself; each time, I overlook it and don't, but this year I did. Train from Munich to Tegernsee, five of us on a Bayern Ticket and I was sorted. Set in gorgeous countryside, Tegernsee is a large lake, 2,500 ft above sea level and about 12 miles from the Austrian border. It is more than a bit nice and it has a rather good brewery when you get fed up of all that lakey gorgeousness.

The brewery and beer hall are pretty damn big.  One thing the Germans don't do by halves is beer and beery things. (Well they do do half litres, but you get my point I'm sure).  The Tegernsee Brewery's record of beers sold in one day is 3600 litres.  They won't run out of beer either. They keep 14,000 litres chilled and ready to go. As I said, they take their beer very seriously there.

We normally sell Spezial at the GBBF, but I started, as we all did, on the Helles. Clean, herbal and very drinkable. But that wasn't my mission. No Sir.  Spezial was required and procured. It was indeed special, with a more full bodied and bitter taste and dangerously drinkable despite being 5.6%. It made the rain, which temporarily marred a lovely day, all the more bearable, particularly as we were under cover. Well most of us were. I seem to recall Tyson got a bit wet. Collateral damage if you like.

It wasn't exactly a sentimental journey, but it was along those lines. Go there if in the area. It is very highly recommended.

Being an hour outside Munich, the beer was around a euro cheaper too.
Posted by Tandleman at 14:16

Sounds cool. I had the helles at the Weisses Brauhaus in Munich. I remember it having a slightly nutty, toasty quality that a lot of the others didnt. Didn't see the special anywhere though.

Everything tastes better when you're not the one getting wet.

Mark - Yes they sell it there indeed.

Tyson - at least it wasn't cold.

Glad you lot made it and found it so well. It is really a lovely place.

Mark, I'm with you on the Cheerios-like maltiness. The Hell was on at our Münich hotel bar and it struck me as quite flavourful there, a nice surprise.

Yeah this is a place I've been meaning to visit as well. I did have the hell at some underground Rock-a-Billy bar somewhere in Munich that I promised a friend I would go to with her. I was worried I wouldn't find good beer at this place but lo and behold they had Tegernsee on tap and it was just fine by me. Many 1/2 liters consumed that night over a Fusbol table.

My son and I visited Tegernsee on our last trip to Munich (August 2009). Lovely setting and great beer as well. It was a baking hot day, so after admiring the lake against the backdrop of the mountains, we sat inside the cool, cavernous beer hall. Considering it was the beginning of the week the place was pretty full.

We lunched there and tried all three Tegernsee beers - Helles, Spezial and Dunkles. I can't recall which of the three I preferred now, but your article certainly brought back some pleasant memories of our visit there.

You going to post anything more about München? Personally, I believe that trip may very well be my last ever trip there, and I live a 90 minute train ride away. Just too bloody expensive for ridiculously overcrowded places pumping out shite food & beer. If you lot hadn't been there, we'd have gone back home after the first night.