I Echo What Tyson Says 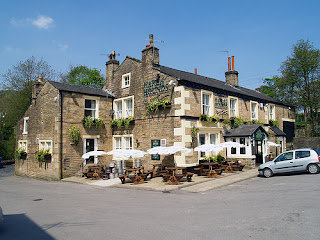 After a hectic day which included a visit to a far off world to judge a pub in the Greater Manchester Pub of the Year competition, I thought I'd come home a write up a few lines on our own Pub of the Year, the Hare and Hounds at Holcombe Brook near Bury, well Ramsbottom, which is near Bury. But I find that newshound and beerhound Tyson has beaten me to it, so I'll have to think of something else. Tyson had complained to me earlier last night about me stealing his thunder when we went to the American Beer Festival preview at the Port St Beer House, so I suppose that's all fair enough.

The pub is the current runner up as Publican Cask Ale Pub of the Year to none other than the Sheffield Tap (so it must be good - right?) and previously has won the award outright.  I can only echo as Tyson recommends, that you should indeed visit the Hare and Hounds for top quality cask beer.

None of that flabby, over vented, warm stuff is offered and the beer is all around £2.60 a pint.

Beer of the night was Oakham Inferno. It didn't last long.
Posted by Tandleman at 16:38

It sounds great, a lot better than our POTY: the Lakeside Inn, which is nice enough with views over the Marine Lake, and the claim of being the smallest pub in the country. But with beers like London Pride and Tetley's Bitter, it's "out-beered" by several other pubs within half a mile.