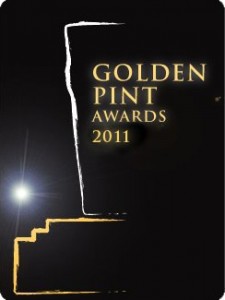 It is Golden Pints time again where we choose under a number of categories our favourites and runners up. I'm at a disadvantage here though. I don't tick, I don't buy fancy beers, I don't visit independent retailers to purchase said exotics etc. etc. But you know, even though I may not be the best person to ask, I can give it a go. So here we are. Winners and runners up and maybe the odd honourable mention.

What can you say about Windermere Pale? It has everything I want in a beer. Sheer swoopability, clean, great taste, loads of hops and you don't fall over after a few. Brilliant stuff. Osset Citra was by far the best of the Citras that dominated for a while. Well crafted beer from a great brewery and that lovely smack of Citra.

The 1516 version of Hop Devil was stunning, with booming C hops, great body and sheer beery enjoyment. It achieved rare drinkability for such a strong beer. Spezial is pale, blond, bitter, full bodied and at 5.6%, far too easy to drink. Both beers drunk at the brewery taps.

Hawkshead. Everything they do is brewed with such attention to detail and to being able to drink a few of them. None are sticky. All have that cleanliness that I just love in a beer . Runner Up: Buxton Brewery.  Clean, well crafted and seek out beers.  Honourable mentions: Pictish, Kernel, Thornbridge

1516 Brewing, Vienna. Runner Up: Augustiner, Munich. Again it is that drinkability thing, though it always reminds me of good times and that's worth a lot.

Pub/Bar of the Year:

Winner: The Southampton Arms London. Everything I want in a pub.Great beer, appropriate food, a wonderful atmosphere and my sort of customers. Runner Up: The Angel, Manchester. Great beer, great staff, great prices and it's on my bus route. Honourable mentions to The Regal Moon, the White Lion Delph and the Tavern. (My locals and my friends go there or are there.)

Beer Festival of the Year:

National Winter Ales, of course. Runner Up: GBBF of course.

I've thought long and hard about this. A blog to me has to be independent and personal. So all the band wagon jumpers and clones are out (you know who you are). So overall it has to be:

Winner: Pete Brown. Independent and personal boxes ticked and he writes so well, wears his heart on his sleeve and talks (mostly) sense.

Runner Up: (Joint) Boak and Bailey. They don't say much, but somehow you like them just the same and they are independent and personal. Reluctant Scooper: Independent, personal and so well written. Honourable mention: Stuart Howe. Brewing at the Sharp End. In case you didn't notice. I like independent and personal blogs. Blogs that reflect the likes and dislikes of the writer. And Boak and Bailey.

Simon Johnson of course. Nobody in the same league is there? Runner Up: Stringers Beer. Does he actually have time to brew?

Get back to Belgium. It has been a couple of years. Or more. I fancy some lambic, or kriek or.....

Labels: Awards
Email ThisBlogThis!Share to TwitterShare to FacebookShare to Pinterest

Pretty hard to disagree with any of that really.

Buxton is that great? And here I was actually *in* 3 of the town's pubs in October, but didn't actually drink any of the beer. Have to go back then.

Can't argue with you on the Hawkshead WP, and IIRC I wouldn't argue on the Osset Citra. I WOULD argue on the Augustiner though. Is that 1516 smoke-free now?

We also are overdue for Belgium. May rectify that with a car trip (free petrol) in the next couple of weeks though.

Some good choices. Hawkshead have surprised many here with their outstanding quality this year.