Some time ago, I remember reading about Isle of Arran Brewery planning to raise expansion funds by issuing equity a la BrewDog. It was in the (Glasgow) Herald newspaper here, but frankly, I forgot all about it. Seems the plan was to issue shares to build a new brewery on the island and increase capacity. Sounds familiar. 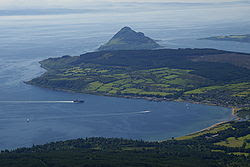 Today I read in the ever useful Morning Advertiser that two things have happened. One is that last week Isle of Arran and Isle of Skye Breweries (one of the oldest in Scotland), are to merge and that the new company, Arran Brewery will raise £4 million and will be opening a number of "craft beer bars", starting with one in Hope St/ Regent St in the City Centre of Glasgow.

Now the original Herald article mentioned that the aim was to raise £10 million, so I am not sure what has happened to the figures, or whether the proposed upgraded brewery was ever built, but it is interesting nonetheless and a development that will be worth keeping an eye on.  Nor is it clear whether the brewery on Skye will close.

The new craft bar (define that - no don't) will seemingly have 25 different beers. As both Skye and Arran major on cask beers, lets hope that there is one aspect of "You know who" that isn't aped in rushing to exploit the craft scene.

The BeerCast also covers this here.  There is also an informative piece on Business7 here
Posted by Tandleman at 00:30

The bar is going to be a large, swish establishment over two floors in the city centre.

I am told the Skye facility will remain open. Of course, that’s what brewers always say.

'will be opening a number of "craft beer bars"'

Surely the demand for such places is ultimately finite. Sounds very much like jumping on a bandwagon that is already well down the line.

I wonder how many of us thought there was a new beer from BD called Arran Ape?

I wouldn't say its "well down the line" at all. Its still all but impossible to find decent keg beer if you don't live in a major city centre. That leaves huuuuge room for expansion.

I see a craft beer bar just opened in Lincoln, which was absolutely rammed on Sunday night when every other pub - Wetherspoons included - was virtually deserted.

Of course Brewdog is just a total rip off of a US brewery even down to the wording on their labels. At least this one is Scottish owned.