I don't bother that much with history in this blog. You have to be a particularly pernickity person that likes facts and exactitude. I paint things with  an altogether much broader brush. But I do like to read and know about old breweries and the like, which is reflected to some extent by my small collection of breweriana.  I haven't collected anything much for years now really, but one or two interesting pieces adorn a bookcase in my sitting room, so I thought I'd share them.  These examples of advertising - showcards - in the parlance - are of course, history and both are quite old. 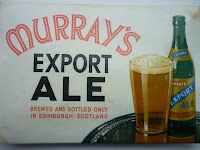 Murray's was one of many Edinburgh breweries that turned up its toes in the takeover frenzy of the 1960s.  According to the Scottish Breweing Archive, "The company was acquired in May 1960 by Northern Breweries of Great Britain Ltd, later United Breweries Ltd, York and London, England, which merged with Charrington and Co Ltd, London, in 1962 through a holding company, Charrington United Breweries Ltd. It continued to brew until May 1962 when brewing was transferred to Aitchison Jeffrey Ltd, Heriot Brewery, Roseburn Terrace, Edinburgh, Scotland. Bottling and malting continued at the North British Brewery until 1964"

Devenish closed as recently as March 2004 having fallen into the hands of Whitbread and subsequently, after a lot of mucking about, changes of ownership and brewing stopping and starting, it went bust and that was that.

Nice little mementoes of the past.

I've just realised since blogger inconveniently changed, I haven't done labels as they have moved them to a new place. I'll restore them now, but I'm not going back over those that have missed out.
Posted by Tandleman at 13:27

Stick your old crap on eBay. All manner of beer geek old balls buy any old crap. You can make a bob or two.

When you run out of tat, start nicking it from pubs. Tidy little enterprise.