Me and Black Sheep 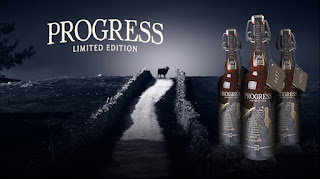 I received a very glamorous bottle of beer from Black Sheep Brewery last week.  It is a fancy 10% abv effort, celebrating 20 years of the company's existence.  It was nice of them to include me, though I'm not sure when I'll get the chance to drink a 75 cl bottle of such strong beer.  At least it won't go off soon.

We do have a slight connection though, me and Black Sheep and one that does make this kind gift  apposite.  Around 21 years ago, I was present at a beer tasting by Black Sheep before they launched. It was held at the Beer Emporium in Oldham, a pub which alas no longer exists.  I can't remember what feedback I gave on the beers, but no doubt me and others did, so I have contributed, albeit in a small way.  It is at least a connection.

Good to see they have survived and prospered.

There is a good photo of the Beer Emporium here, but take the date of the photo with a pinch of salt. It was closed and knocked down long before 2009
Posted by Tandleman at 09:42

Labels: History, This and That
Email ThisBlogThis!Share to TwitterShare to FacebookShare to Pinterest

Got to try this at a tasting organised by Darren 'Beer Today' Norbury at a local pub last week. (He gets sent all the stuff we don't...) Smelled foul at first but, by the end, the 'panel' was in raptures. Would like to have another go with a (ahem) more sober head on and take some notes this time.

Did it perchance smell pongy, Bailey? If so it will be right up the tands street.

Without wanting to pre-empt Darren's write-up, one of the party sniffed it, recoiled and said 'Armpits'. But whatever the pong was dissipated.

someone bought me a bottle for my birthday, i'm just waiting for the right time to open it

I will watch out for this with interest. As we know, Black Sheep brew consistently good beers :-)

I'll be trying to get my mitts on this. Altough BS Bitter isn't really to my tastes, I do really enjoy Yorkshire Square and Golden Sheep and have been mightily impressed with the Spring and Winter seasonals (the terribly-named Wooly Jumper Porter) that have appeared this year. I'm fond of them, for sure, despite there being a taste in the bitter that I just can't get on with...

Black Sheep is a modern microbrewery? (Or micro grown big?) Wouldn't have known.

You made some decent points there. I looked on the internet for the issue and found most individuals will go along with with your website.