What Do You Make of This?


A few weeks ago I wrote about the nearest JDW to my flat in London and remarked on how much it had improved.  Seems I may have spoken too soon about the Goodmans Field.

A couple of weeks ago we popped in on the way home and though I can't remember the beer names, I ordered pint of whatever this guest beer was.  It was extremely murky.  I queried it and asked for a replacement.  The next guest beer was identically murky, as was the beer from a third pump.  The poor barman obviously had no idea what was going on and asked if I'd like to see the manager.  I would.  I was assured that I had just struck an unlucky co-incidence and that they had all reached the end of the barrel at the same time.  I may just have looked doubtful.  "Hmm" I thought. "OK. I'll have a London Pride".  You are probably way ahead of me.  It was like electric soup.  Another co-incidence I was advised.  So I had a pint of the cruel Heineken. 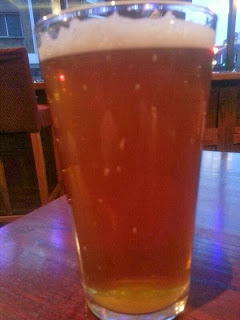 A couple of days later I called in again, reasoning that it would all be new beers by then.  My ordered pint of Vale Misty Hop was cloudy.  I wasn't going through all that again, so tasting it gingerly, it wasn't that bad.  "Misty Hop" I thought. "Wonder if it is meant to be cloudy?"  The Blogosphere didn't know, so I emailed the brewery. This what they said "Misty Mountain Hop should be served crystal clear."  Now my first thought was to bubble this mob to Cask Marque and I will if next week when I'm in London, I call in and there is the slightest doubt about the beer.  But it may just be they had a disastrous weekend in the cellar and its a one off. I'm a kind sort underneath, though there is no excuse for selling under par beer, which they were quite blatantly doing. My second thought was about the Misty Hop.  I had thought that this might have been one of those daft beers that are meant to be served cloudy?  I didn't know and the name hinted that it might.

Nonetheless when an old hand like me can be well and truly fooled by the possibility of badly kept beer being this new fangled "unfined beer" or whatever they call it, what's happening to other poor innocents?  Are they being fooled too?

I'm not a fan of unfined beer as you can probably tell.
Posted by Tandleman at 08:09

I think it was Pete Brown who recently said that cloudy cask beer from "railway arch" breweries seemed to have become the norm in trendy bars in London :-(

As I've said before, if you intend your beer to be cloudy, declare it on the pumpclip and let punters make an informed choice. Otherwise it's always an indication of poor cellarmanship

If its Unfined it should state it as such on the Pumpclip.
Though if the beer tastes good, it is good and a little haze is never an issue in my mind be it unfined or not.

@Curmudgeon - lots a late & dry hops does tend to = Hazy.

@As I've Said before - Cellarmanship is one thing, but a missed dose of finings in the brewery is often another so best not always blame the pub.

I'd definitely blame the pub in Tandy's case. Also the JDW that my local branch of CAMRA gave a Pub of the Month award to the other day has often seemed in the past to be a "clarity lottery".

Mudgie: Jeff Bell ex Stonch who runs the Gunmakers in London has been giving forthright opinions on some of the London brewers. Not that favourable either.

pdtnc: Be fairly unusual for missed fining to happen to four different beers from different breweries.

Hazy is one thing. Cloudy another.

ahh, yes indeed, its a very unlucky landlord that managed to buy miss-fined beer from a number of different breweries! :D

You get to use your CAMRA discount vouchers?

No. I'd been thrown out on my ear by then!

It's real ale, it's supposed to be like that ;)

I'd try to contact Tim Martin, JDW's boss. I'm certain he'd get them sorted out.

when JDWs suddenly swap from good to bad beer in such a short timeframe it often means the previous (good) bar manager has left or moved elsewhere, and especially in london where they seem to move around alot more,and theres someone temporary or not upto speed running things in their place.

although Misty Mountain (spot the Hobbit reference) Hop sounds like it should be crystal clear for sure, whilst Misty Hop definately doesnt, which is interesting, but for one word you get a totally different impression of what the beer should look like, but I do think alot of pubs are using that point, that people can be fooled on what a beer should look or taste like to sell alot of subpar beer.

I wonder why it's so hard for some pubs to get real ale right. Many seem to dislike unfined beer for being "cloudy". The benefit is at least it can be drunk like that. To my mind though an unfined beer should be pretty clear. Certainly clear in a champagne flute if not in a pint. If it's murkier than this it hasn't been racked long enough before and/or after spiling. Fined beer served murky is clearly horrible as you'll be ingesting all the sulphites and isinglass. Wouldn't it be great if there was an indicator on the pump clip telling you the percentage of the cask remaining and days since spiling. Useful for drinkers. Useful for the publican.

"Wouldn't it be great if there was an indicator on the pump clip telling you the percentage of the cask remaining and days since spiling."

Publicans wouldn't like it as it would expose how long they had kept their beer on for.

Mind you, just a simple statement "this beer was put on on 01/02/03" would do wonders for beer turnover and quality.

Good point but I think that is half the problem with real ale. Unless the pub has high turnover there's a high chance of a week old bottom of the barrel pint. They should, like supermarket best before dates, sell at a lower price when the beer ages.

Incidentally one of the advantages of unfined ale is it tends to keep fresher for longer - certainly more so than some of the "fake" ale which is really just bright beer from the conditioning tank.

re: I think it was Pete Brown who recently said that cloudy cask beer from "railway arch" breweries seemed to have become the norm in trendy bars in London :-(

this just demonstrates the failure of pubs to rack the beer properly. After all a lot of bottle conditioned beer is unfined and I suspect many "anti-unfined" drinkers tuck into them without prejudice. After it journeys home they can either drink it shaken and cloudy or leave it to settle. Same goes for the pub. That pint in the picture though looks fine to me as evidence by the transparency at the bottom of the glass it's pretty clear. Perhaps the future is a return to steel and porcelain tankards and then people can drink with their tastebuds!