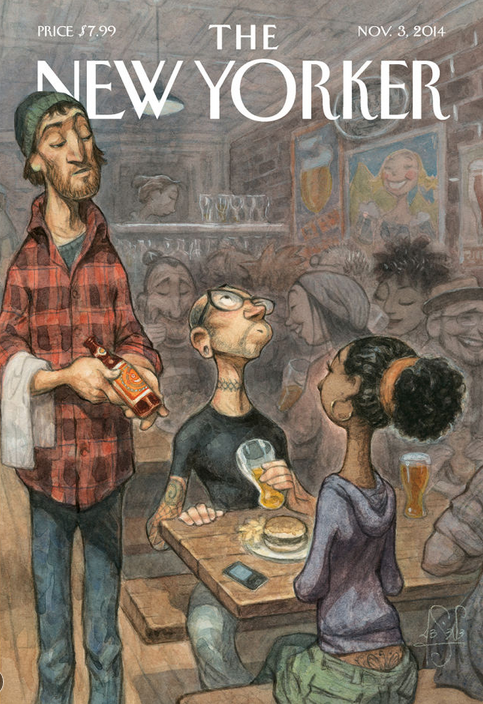 The cartoon that illustrates this post was sent to me by one of my Yankee chums. My American friends seem to like it, but I'm not so sure.

Let's have a look. It is contemporary being next month's New Yorker magazine. We have obvious hipsters. It looks like it is in a trendy bar, not a restaurant and it has no caption. Does that mean it is self explanatory? Is there some article inside that puts it in context? I don't know. On the face of it, it is a guy having a taste of beer before he confirms his purchase in the same manner as he might with wine. Would that be a bad thing however unlikely? Is it a pop at perceived pretentiousness? Is it a go at hipsters with their pernickity ways? Is it a New York thing or is it more general? I really can't say.

Whatever it is, I love the look on the waiter's face.
Posted by Tandleman at 09:23

It links to a story about the rise of fine beer in Brooklyn: http://nyr.kr/1txSUDZ

I take it as a social comment on beer elitism, adopting the rituals of wine to the consumption of beer. I like it, it's smile funny, not laugh funny.

The scene could be described as pretentious, though whilst the nation laughed at Jilly Goulden and Oz Clarke, wine popularity rocketed and wine became a far more democratized drink. Pretentious craft is popular and selling like hot cakes.

Beer may already be a democratized drink but that may make it unappealing to aspirational prosperous middle class folk that want products to define a lifestyle.

If beer and pubs are in decline in their core working class market why not start calling things "craft", intellectualize the whole shebang of a pissup and make it appealing to a whole new crowd. Hipsters are nice people, they have a bob or two to spend, look at what they spend on iPads and phones. They pay more for a pair of scruffy looking jeans than you'd pay for a suit. They are a prime market to sell high priced stuff to. It makes them happy. No one is harmed.

Maybe it's rude to snigger at the crafties. They may be mugs, but it's their quid.

This is on the FRONT COVER of the New Yorker - trust me, this is a good thing for beer!

It's good that people are realising beer is a quality product that deserves a little pretense upon occasion - just like wine. If this means better beer, available in more places, then this can only be a good thing.

Also, I think it is a restaurant, everybody looks to be eating.

I hope there's pulled pork in that bun.

I think it's a wonderful image, tongue in cheek and capturing the evolving beer scene in an almost self deprecating fashion. The article is great too and reminds us not become snobs about such things but that doesn't mean we should prevent it from continuing to evolve.

What? No Scotch eggs?? Fake hispters.

But in all seriousness.

As I mentioned on Alan's FB page last night, there is something familiar about the posture and look of the girl in the picture. She reminds me of many of the women that get dragged into brewery tasting rooms and suffer their male companions waffling on about ABV, IBUs, SRM, some awesome new hop, and so on ad nauseum, when all she wants in a beer she enjoys.

Yes because only men do that Alistair. What a complete bore we all are!

It could just as easily be Portland, Oregon except for the waiter's cap -- I took it for Portland, Maine. Otherwise it perfectly captures hipsters and their enthusiasms--trust me on this, it's nearly a photo.

But playful rather than snotty.

Always trust you Jeff. You know that.

Hipsters are controversial subject matters in this neck of the blogosphere though.

Is it really all that different to hirsute middle aged people trying half the handpumps before ordering something, as seen in freehouses for the last 20 years?

Anon: Only in degree.

The tramp stamp catches it perfectly.
As I keep telling my kids it will soon be uber cool not to have a tatt.
Kipper Williams used to do something very similar with Spreckley in Time Out.

The article is about beer taking the place of wine in foodie places in Brooklyn to partner with the food, that's no bad thing surely!

I'm a huge beer fan and always like a choice of beer to go with my food. I always thought that places spend lots of time on wine menus and not enough focus on the beer. As lots of beer is being brewed in the US it's a good progression that places are focusing on this instead of just wine.

Come on - it's just a man in a check shirt offering someone a beer instead of wine.