Too Much of a Good Thing


I like a head on my beer.  You may not know that.  But even I can feel that sometimes that there is a point where a line should be drawn.  On our last day in St Petersburg, in glorious warm sunshine, we stopped at one of the two Soviet style cafes that we'd come across.  Soviet in this case means only that they had stuck up a hammer and sickle sign and painted a few things red.  Otherwise there was nothing different to elsewhere and the prices would probably have induced a fit in Leonid Brezhnev and his cronies. 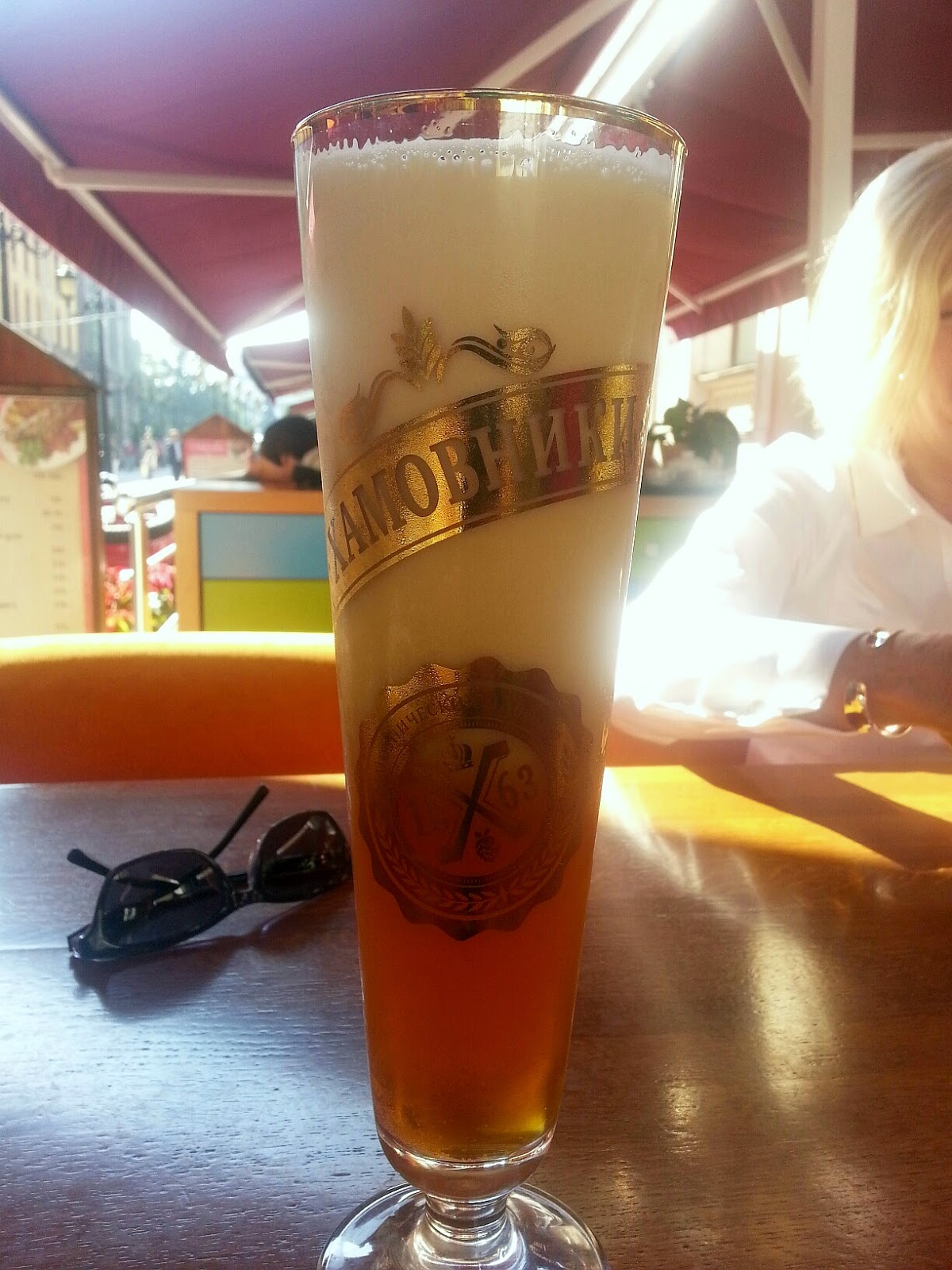 Still we had roubles to get rid of and only an hour or two to go, so I plunged in.  I have no idea what the beer was called, only that it sounded different and indeed it was.  It was, as you can see served with rather a large head.  It was so milky at first that a Yorkshireman, a lover of the autovac no less, may have paused with concern as he watched it settle.  It wasn't nitrogen poured as far as I could tell, or if it was, it was with the lightest of mixes.  The young waitress who spoke no English brought it to the table with a flourish.  I looked at it dubiously.  Our server gestured that I should sup it before it settled.  Well when in Rome and all that.  It was delicious.  A pale auburn brown, it had hops, balancing malt and great mouthfeel.  I ordered another despite it settling out to around a third of a pint of beer.  I'm guessing that the equivalent pint price would probably be North of eight quid.  Thinking ahead,  I decided not to nick the glass (got far too many of them) as compensation, attractive though it was.

Russia does things differently, but I have to say, cost aside, it was the best beer of the trip, even if I don't know what it was.


Any Russian speakers out there could maybe translate the glass and let me know and actually, I wish I had liberated it now.  As tasty as the beer, it is half litre size.

I want what I paid for, to the exact millimeter.

Don't blame you for not nicking the glass. Putins Russia and all that. You need to be careful in some countries. You could have slipped it into the missuses handbag though then you'd be free to booze for a few more days in between trips to the British Embassy to try and get the girl out of gaol.

Khamovniki (or Hamovniki); named after a district of Moscow. Apparently one of Moscow's oldest breweries used to be there - it was set up in the mid-1800s by Czech brewers. It's now a trade name of the Moscow Brewing Company. Sounds like they're still making an effort, though - they do a 'Viennese lager' and a Munchener, as well as a Pilsner and a wheat beer.

Thanks Phil. Brilliant. Didn't see it at all in Moscow funnily enough.

Once I'd worked out the transliteration it took about ten minutes to get the rest of the information, and half of that was spent on 'wheat'. It's all online these days!

If it was one of those four styles, any idea which one? From your description it sounds Munchener...ish... sort of.

Any idea of strength? It does sound like the Munhenskoe. You do see the Pils around as well but it's nothing special

If you want to make the friend of themselves then this question you can remind in their mind is beer good for you, then answer will be comes in yes always.

From a drinker's perspective, what's to love about the Autovac!?

Neil: I'm not a great fan of them either.