I went to a preview night of a new pub in Bury last night. It opens tomorrow officially. I say a new pub, but it is actually a renovated pub, re-opening after three years of closure and after a lot of money has been spent on it. 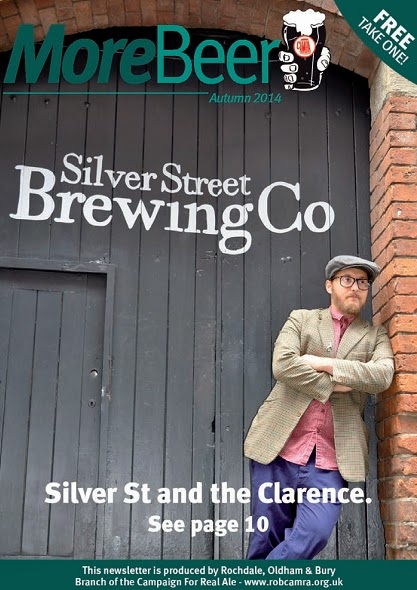 The Clarence was a Whitbread pub and had suffered from a lack of investment until bought from whatever PubCo had inherited it. It was virtually falling down, though that wasn't apparent from the outside. It has been stripped back to the bare bones, a lot of steel has been inserted and years of thoughtless renovations peeled back. For example five layers of flooring has to be removed to reveal beautiful original Edwardian tiling in the bar and a side room, which have now been renovated and are a striking feature of the pub.  Owner Lee Hollinworth showed me round and was obviously very proud of it. There are four floors, with an operating Dave Porter built brewery and the toilets in the basement, a ground floor bar which is centrally positioned. Lee explained that the architects had wanted it elsewhere, but when the tiling was revealed, the original bar position became obvious. So there it went, Lee reasoning that that was what the pub was designed to look like.

Upstairs is a fifty cover restaurant with large windows and a view out over central Bury. Up one more floor is another bar. This will be reserved for diners, for pre and post meal drinks. Cask beer is on the bar here too.  It is all very well done and must have cost a fortune. Beers are from the in house brewery and were excellent. Even the brown "Session Bitter" impressed, as did the Porter.  Most of the craft keg beers are supplied by Bury's Outstanding Brewery and there will be guest, both cask and keg . Early days I know, but I can see this venture being a roaring success.  I  already plan to take my lass there for a meal one evening soon.

In these times of pub closures, it is refreshing to see a local entrepreneur investing money in such a project. There's life in the pub business yet.

The photo shows brewer Craig Adams outside the brewery. It is from the CAMRA Magazine I edit.  Nice innit?  You can read it here.

Also, in the interest of disclosure, I was given one free pint last night as was everyone else.  All other pints were paid for. There's a lot of money to recoup here.
Posted by Tandleman at 13:46

Pub, bars and restaurants are closing here, too, which shouldn't surprise anyone, really. But while that happens, there are also plenty of success stories, either from places that've been around for some years, or from new places that are doing quite well. The reason for their success is quite simple, on paper. It's not about price, or even, to some extent, location, it's about doing a good job, so good that clients will be happy to come back and recommend them.

PS: Doing a good job is no guarantee of success, but it will certainly give you more chances than those who don't

Dave Porter? Presumably the one who used to run Porters Brewery. We had a trip to his brewery many years ago, but it is long gone now.

Dave Porter sold his brewery to concentrate on supplying breweries for others. Once you've seen one you can soon spot a Porter brewing kit

I was tipped off about this the day after opening when in town for Tranmere's latest defeat (update: lost another since). Agree that it looks expensive; retro in the modern style, if that makes sense. The beer was good and the pub was busy. Can we have one of these in Birkenhead please?