When Guinness Was Real 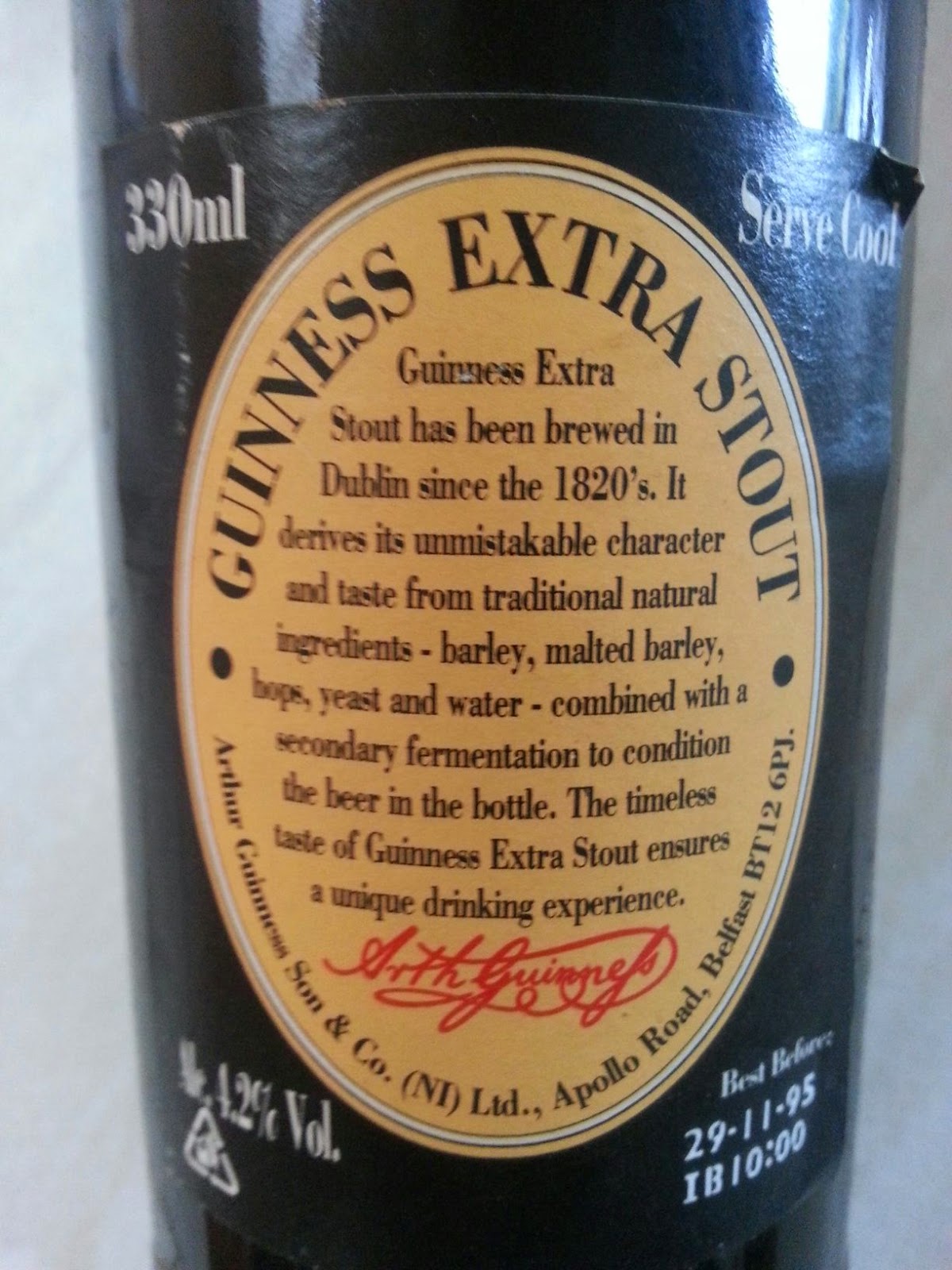 When did Guinness stop bottle conditioning?  I'm not actually sure, but certainly some time in the early nineties I'd say, even though here Martyn Cornell says in the eighties.  I was interested in this when reading Boak and Bailey and a suggestion - quashed as a possibility by the Beer Nut - that they start bottle conditioning their beer again. Going back to when they stopped, how do I know it wasn't the eighties?   Well, while checking through some old stuff as part of a fairly fruitless endeavour to get rid of some junk, I came across a stash of bottles including the one you see photos of.  It is "ordinary" bottled Guinness and  bears the following words on the back label "ingredients - barley, malted barley, hops, yeast and water - combined with a secondary fermentation to condition the beer in the bottle." 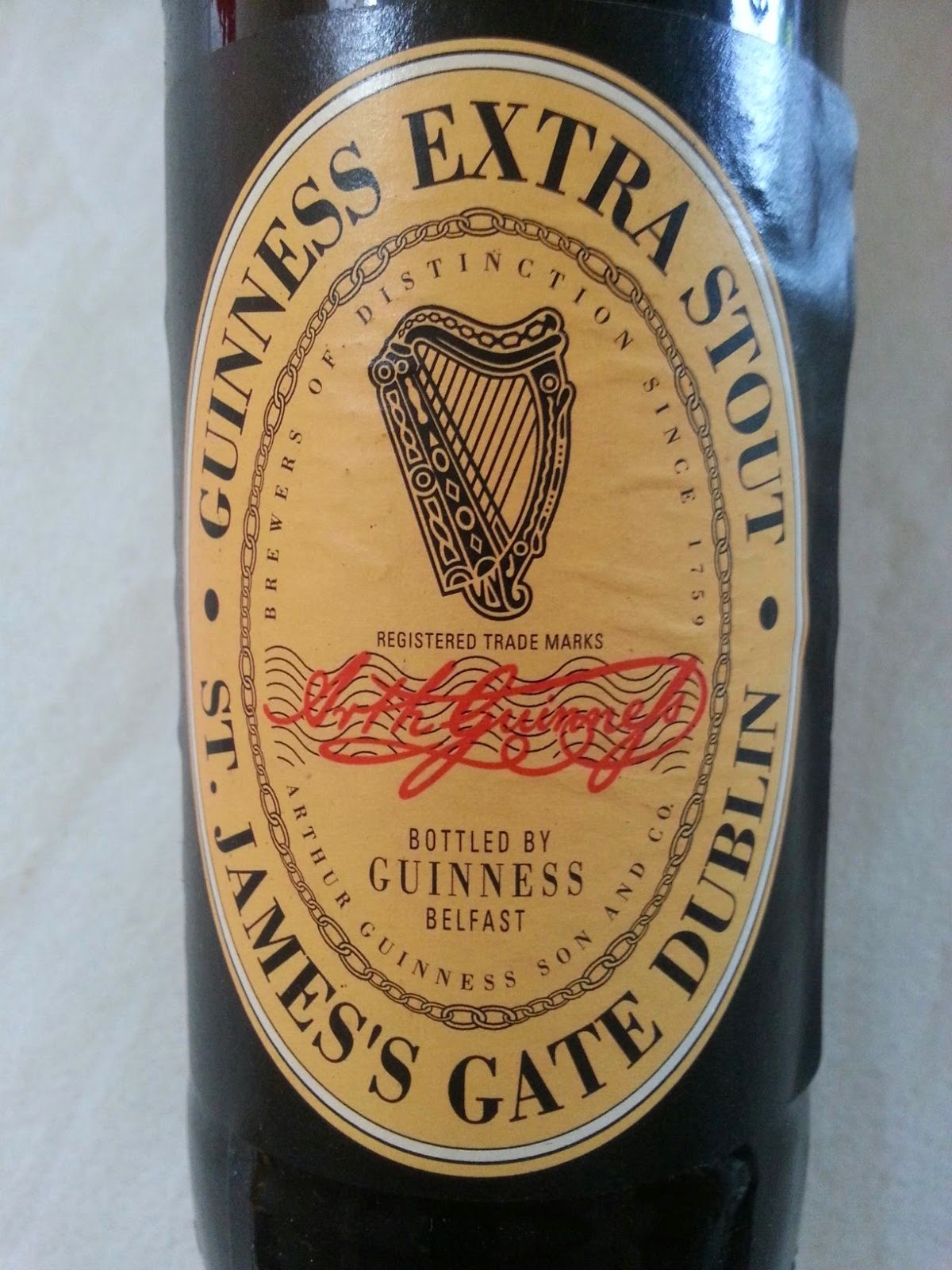 I recall buying it as part of a four pack in Belfast and you will see that the best before date is 29-11-95,  indicating a bottling date of maybe nine months, or slightly more, before that.  Interestingly it is bottled by Guinness Belfast.   I'd imagine the beer is still pretty well drinkable, as it has sat in the dark these last 18 or so years, though I may be wrong.  Maybe I'll try it and maybe I won't. Can't be that many of them around though, so maybe I'll keep it a bit longer.

Going back to Boak and Bailey, I was astonished at the praise from some about the two new Guinness Porters.  My view and that of many others is that they are complete gack. After giving it short shrift on Twitter and getting the odd disagreement, I agreed to try the West Indies Porter again.   At the Baum last week as part of a double tasting with the Dublin Porter, it was still a horrid, sweet, fizzy mess, as was its partner in crime.  No-one that tried them that night thought them that good at all.  Still, as I said on BB's site, beer is a broad church and I didn't even think of mentioning duff palates there. Perish that thought.

Sadly and truly, the best thing about the new beers was the labels.

The label from the early nineties is rather good too.  Bit of a classic. Click on photos to enlarge.
Posted by Tandleman at 17:48

Nice one! I remember it still being bottle conditioned into the 90s so it's nice to see evidence!

Presumably if you looked at all the consecutive Good Beer Guides through the 90s you would find out the answer.

Not really my sort of thing, but I thought the West Indies Porter was OK. I won't be buying any more now that it's gone up to £2.50, though.

The label there looks pretty much identical to the Guinness Extra Stout we get over here, though it is brewed under license in Canada, and I am not sure if it is bottle conditioned. Might have a buy some to check...ah bum, having to drink Guinness Extra Stout (it's not bad really, though not a patch on Foreign Extra Stout).

I understand that bottled-conditioned Guinness ceased production in Dublin in 2000. It was one of a number of outward signs of a change in company ethos following the merger with Grand Met. Park Royal stopped bottle conditioning a while earlier, I think. It should all be in David Hughes's book, if anyone has a copy handy.

BN: Seems a bit late that. Must have a look at various Good Beer Guides. I'm confident - but can't prove it at the moment. - that it was much earlier

I cracked one open in 1997 in Tipperary. I remember it well as I was being lambasted for making festival mild instead of an extra stout. The bottle was supposed to be an object lesson in the style. It failed in that function as it was pretty damn feeble in bitterness and lactic profile. It was brewery conditioned (and, frankly, not very good).
I've long regarded Guinness as the last resort of a scoundrel (me)

Mr Cornell has 1994 for the end of bottle-conditioned Park Royal Guinness and 2000 for James's Gate.

BN: Thanks. I suppose that I didn't know it happened differently UK and Ireland. When did Guinness cease using local brewers to bottle in the UK and did they always distribute centrally in Ireland - though clearly the bottle I have was bottled in Belfast.

They are a bit of a mystery are Guinness at times.

I'm wondering which brewery produced the Guinness for Belfast. One is easier logistically, the other easier administratively.

Guinness did indeed use local bottlers in Ireland though I couldn't tell you when it stopped. Hughes prints an internal company report on the unsatisfactory nature of local bottlers in Ireland from 1970, so it presumably stopped soon after that. He says that Guinness finally took full control of bottling in the UK in May 2006, the number of bottlers having been dwindling since the 1950s. Ridley's was the last British brewery to bottle Guinness.

Thanks John. Really informative. Can't say any more about where it was produced but I'd guess Ireland.