A Bit of a Discovery or Three 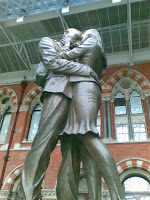 When I come to London, I usually have a Friday wander while E brings home the bacon. But where to go? I did think very seriously about Wurst's suggestion of the Bricklayers Arms in Putney, but decided it was a bit too far out. So where then? Fortunately Scoopergen has just published a London update. It isn't the biggest list in the world - well it wouldn't be would it? - but it gave me an idea. I could visit The Old Fountain, just off the City Road and new to me, then nip over to the Wenlock. But first I was determined to visit St Pancras to have a look at the station and to have a pint in Betjeman Arms on the Upper Concourse which by happenstance, had a beer festival on.

St Pancras Station is a triumph. It has been renovated with sympathy and it is classy! I was very impressed, though what people will make of the attached Underground Station is quite another matter. The pub is tucked away in a corner and the beer festival was on a stillage outside it with around fifteen beers on gravity. There wasn't much exciting, but for me, the excitement was in the venue itself. Watching the hustle and bustle, while a performer sang opera on a stage in the opposite corner, was thrill enough. I was impressed! I chose Phoenix Rip Rap of course. It was flat as a pancake in appearance, but was full of condition and very tasty. I rang the brewer to tell him about it, but Tony was more interested in the station which I had to describe in detail. I had a second half while contentedly watching the world go by and at £3 a pint, perfectly resonable for the surroundings. I could have had a discount if I'd remembered my CAMRA card. Nice touch. On the way to the loos I had quick canter round the pub, dodging a posse of very young monks - yes really - and was equally impressed. Worth a visit with the worker I reckon.

I quick hop on 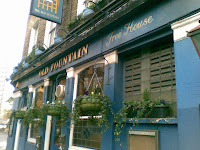 the Northern Line took me to the Old Fountain, just off the City Road.. This looks like a dump from the outside with faded and peeling blue paint, but inside it is bustling, warm and friendly with a two bar layout. I chose the rear one which was busy with office workers enjoying lunchtime meals and pints. I digress, but I always like London for that. The lunchtime pint tradition, which has been decimated elsewhere, thrives here and it provided me with a cheerful backdrop to my supping. Seven different beers were on offer, all apart from London Pride, from micros. Hooray. I was spoilt for choice, but opted for Purity Gold and Dark Star Golden Gate. Both were served full of condition, albeit Southern style, but in this case the beers were so well looked after, it was neither here nor there. The friendly Irish barman chatted to me frequently while dashing about his business. He is the cellarman and knows his stuff. I stayed for two pints and left with some reluctance. This pub is hard to beat for choice, quality and sheer friendliness. I liked it a lot.

A lot has been 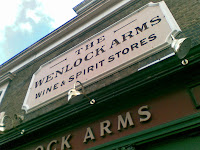 written about the Wenlock and it's a few years since I've been there. It looks great from the outside, but as soon as you enter, a sourish smell assails you. You get used to it, but frankly the place looks filthy with a thick layer of dust over all the memorabilia on the walls and over the bar. It just looks in need of a good steam clean. The beer though was widely varied and the two halves I had were in excellent condition. Very noteworthy was the Oakham Hawse Buckler, which was complex, dark and very tasty. If I'd been in better surroundings, I'd have stayed for more.

I caught the bus home - buses are underrated in London - and popped in the Dispensary in Leman Street. Dark Star Golden Gate again and while not in the sparkling condition of the Old Fountain, was very acceptable indeed, with a very pleasing hop finish.

Later when the worker finished I walked over to Gracechurch St to JDW's Crosse Keys to join her. This is a huge and rather opulent Wetherspoon which I assume was a former banking hall. It has marble pillars and a huge dark wood and granite circular bar. It was buzzing with office workers and had around 15 of the JDW festival beers on and some of the most efficient staff I've seen in a JDW. I lost count of the number of times I was asked if I wanted served which is a bit of a first! We tried several between us though E was annoyed by the lack of pale beers. A good point. I liked Hilden's Molly's Stout, York's Centurion's Ghost and Titanic Russian Stout, thought the Clarks, and O'Hanlons OK to good and the Robinson's Chocolate Old Tom horrible.

So that was that. There were a few beers not tried. I wish I had tried the Mordue but chose not to. Maybe they have improved but I always avoid them. Maybe my bad! I will make a point of giving them another chance one day. St Austell Proper Job still eludes me.

I did though have a great day out in London with good well kept beers and good pubs too. The Old Fountain really hit the spot for me. I will be back there soon.

Glad to hear you liked the Hawse Buckler -- I got quite emotional when I tried it in Frodsham the other day.

Scoopergen - the public service broadcasting side of beer scooping!

Glad you found the suggestion useful...

nice to see a shout out for Centurion's Ghost down there - a lovely beer.

The Centurion Ghost appears to be a regualr guest beer in the Doric Arch these days...