Did you know that Bury is one of the smallest Unitary Councils in England? It probably explains why the town seems to be thriving - at least as far as new building is concerned. But enough on this.

The official beer of Bury Beer Festival, as voted by the punters, was Dunham Massey Chocolate Cherry Mild. An interesting choice really, with its very strong cherry and almond flavours, but good in that it shows that the drinking public are unafraid of challenging tastes. It has an impressive track record of winning festival awards, so well done again.

What else was good? Brew Dog's Punk IPA was impressive, as was the Coffee Stout, particularly as you couldn't really taste much by way of coffee. Good call that I'd say. Phoenix were as usual superb, sold out pretty rapidly and the new Simco showed much promise with its perfumy bit 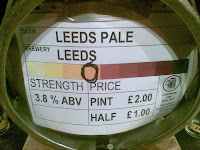 terness. The strong and bitter Outstanding Stout and the lemony Pilsner were terrific, though Standing Out didn't work for me. Leeds Brewery's beers sold well and were popular, though I thought them well made rather than exciting. Grindleton's beers were up there with the best of them, the pale Ribble Rouser proving particularly popular. To sum up the rest of the good, beers from Marble, Dark Star, George Wright and Wentworth didn't disappoint and the Thornbridge Wild Swan packed a lot of flavour in for a 3.5% beer. It was a bit expensive though, but then they do have a lot of brewers to pay!

The not so good? The usually dependable Millstone seemed dull and underwhelming. Pennine didn't shine either, Little Valley were forgettable, Hopstar a work in progress with Greenmill the same. The three F's, Facers, Foxfield and Fyfe all could have done better, with the usually dependable Facers not producing the bitterness we usually expect. And we had Boggart. They supplied a lot of the beers which was good. I didn't care much for their own beers though, but some signs of improvement can just about be detected.

Any beers I didn't mention were so-so or forgettable. Only my opinion of course, but we sold the lot more or less, except the Sheffield Seven Hills in its bright yellow cask. It remained stubbornly cloudy throughout and will go back for a credit.

Is it really fair to name and shame a brewery who unfortunately had a problem with one cask of beer that went your way?

I don't think it is. Mentioning specifics is one thing - delighting in the misfortune of others is quite another.

Your comment would carry a lot more weight with me if it wasn't anonymous.

In any event, I commented on why it wasn't sold. Where did I delight in it? There is never delight when a beer fails to either clear or please. Why on earth would there be?

Perhaps they're the Sheffield brewer!

Shame about the Hopstar beers. I normally find them pretty reliable although I only recognise Lancashire Gold from the list you published.

An interesting dilemma when commenting on beer festivals. If Tandleman had not said anything about the beers he didn't like then the post would be worth less than half the interest value.

But he did have some not so nice things to say about my friends beer from Foxfield. Maybe it was shit, if so then he's probably right to say so. I haven't tried this one and will attempt to taste it soon. After all, there is evidence to suggest Tandleman is human and also might occasionally be wrong.

I do cringe when beers get a bad write up because I know how I would feel. Sending them to a beer festival where the cooling might not be optimum (this will retard clearing and effect flavour) is quite daunting for a small brewer. It's why I don't like sending my beer out unless I'm certain. For me £70, say, barely covers the effort of sending out a cask full of any liquid let alone a craft brewed one. To have it criticised can hurt deeply.

However, it can be beneficial to engage in discussion via this format about specifics. A brewer who can be bold enough to not be anonymous would in fact gain credence by understanding the feedback.

So I do agree, more weight would be carried by a known person, and I do believe Tandleman does not delight in any brewery problems.

Thanks for this post. It has always been my policy to tell it how I see it, but of course it is just my opinion, though I can tell when a beer is poor rather than me just not liking it I assure you.

Beer festivals don't really do beers many favours. The temperature is rarely right for conditioning and serving. The timings are all wrong too. Most beer is on sooner than I'd like it if I ran a pub cellar - though sadly serving beer too soon is not that rare really these days. If you want to taste a beer at its best, taste it in a reliable pub, then you can really be sure about it. Festivals can be an unreliable snapshot.

This year too, temperatures outside were warm, so the cooling air we bring in through the hall's blowers was too warm. We have a reputation for serving beer in very good form at Bury. It wasn't anywhere near my own high standards this year.

Now having said all that, many, indeed most beers stood up to the conditions well. Some didn't. Some were fine condition wise (though a touch too warm for my liking)but just weren't good beers.

As for Foxfield. there were two, neither on my bar, but I assume the other one, Sands, went well enough, so it wasn't all bad for them.

And the beers that I didn't think so well of will all be tasted by me again if I come across them in the pub. My readers should do that too, but there is little point of being "everything in the garden rosy" about micro brewers beers. There is a lot of poor stuff out there too amid all the brilliant stuff, but that's beer - and blogs for you.

Had the choclate cherry mild at the bar nouveau atGBBF LOVED IT.

u talk some rite shite

For anybody is still following this thread, I visited Foxfield last night. Apparently the Brown Porter was a "small beer" which is when a very strong beer is made first and the mash sparged for a second time to extract more sugars. Apparently some brewers used to do this a lot in Victorian times to maximise extract. So it represented a style.

Unfortunately he has not got any left so I can't tell if it was any good or not. I do find the idea of reusing the mash a bit strange. Sounds a bit like reusing a tea bag next day.

Yes, but they (Victorians)had it for breakfast and gave it to small boys before they sent them up chimneys.

Some ideas are best left in the past.

Small beer! Beer from "second runnings". I've done it myself at home, to make a lighter "Scottish style" beer after a strong "Scottish style" one. It worked well. Anchor brews one regularly from their barleywine mash.

It's a neat idea, but watch out for huskiness.

Isn't this how the Trappists make their table beers?