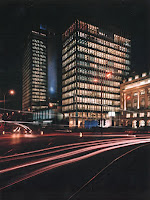 By half past nine on Saturday night, we had been drunk dry of cask conditioned beer. There was cider and foreign beer left, but we closed the doors and got everyone out by ten. After an hour of tearing bars down and generally pulling the place apart, it no longer looked like a beer festival, more like the aftermath of a riot. A halt was called and we sat down among the debris, stunned and shattered. Then we got quietly pissed and slunk off, bit by bit to sleep. I got the night bus at 02.08. A top tip here. Do not bring a kebab on the night bus. One guy did so and his refusal to give it up resulted in a 10 minute delay while a flying squad of First Bus heavies were summoned. They gave him one chance, which when turned down, resulted in him being thrown off like a sack of potatoes, kebab and all. This is good. They should have them out during the day, but then their hands would be too full I reckon.

We had record attendance, record beer sales and unfortunately, record queues. The venue is getting too small for our needs. We signed up plenty of new members, there was excellent beer and cider and lots of very hard working volunteers. For those who believe that these events don't attract women, think again. The place was buzzing with them to a distracting level. It should be a financial success too with a bit of luck. There was over 7000 8000 customers and not one bit of trouble. The stewards did not have to ask anyone to leave, or even, as far as I know, to behave. Real ale does attract a better class of drinker. All in all, a good do.

Now I'm off to the last take down session, where we fill the very large wagon that will go back to HQ in St Albans with a lot of cooling kit, beer engines and a million and one bits and pieces. Then I can get back to normal I hope. I am looking forward to that.

The picture, from their own web site, shows New Century House.

What an idiot - he should have finished it.

I really enjoyed the festival but for a view one aspect may be improved I've copied over part of an e-mail from Scoopgen.

"The NWAF was a disappointment in that we went in and got seats downstairs. Went looking for first couple of beers Cellar Rat that was upstairs and when I tried to bring them down was told I couldn't carry them across the foyer to the downstairs room.

It was effectively 2 beer festivals until the office staff left the building after 5pm. Only empty glasses could be carried. As pensioners, we didn't want to lose our base that we had queued early to secure. It meant that we had to drink the few we wanted downstairs, and hardly had any of the many we wanted from upstairs.

As we share our half pints, I had to go up, buy a drink, drink half and find someone to leave the glass with so I could go down to let my husband come up to finsh the beer. Not the fault of staff, but you made your choice of where to base and got stuck with it, and it meant we got through a lot fewer beers than we could of had. A shame really."

"For those who doubt that these events don't attract women, think again. The place was buzzing with them."

I agree entirely. In my experience, festivals where you can just roll up on the day are more likely to get women and young people in. The same applies at Wigan beer festival, where I discovered that gangs of young women like to hang around the cider bar. I think I might ask to work there again.

Mentioning no names, of course, but I do know of a ticket-only festival in Merseyside that has far fewer women or young people than either the Winter Ales or Wigan.

He couldn't finish the kebab in 10 minutes? How big was it?

"He couldn't finish the kebab in 10 minutes? How big was it?"

Obviously drunk in charge of a kebab...

'...gangs of young women like to hang around the cider bar. I think I might ask to work there again.'

For god sake, keep your voice down. This is the last great secret of working CAMRA beer festivals. The beer-boys haven't rumbled this one yet, and we don't want to have to set up a rota...

Thought you all might find this video fun: Canadian Tourism has put together a video on the making of Iceberg Beer brewed at the Quidi Vidi Brewery in St. John's, Newfoundland.

This was a requirement of the Co-op. I don't think moving an empty glass. rather than one with liquid in it, from Point A to Point B is a hugely difficult restriction.

As for sharing half pints, well and good, but circumstances alter cases do they not?

I think the glass issue is a major problem - so, in effect, there were 2 beer festivals in the same building and you couldn't get between the two with beer. Now some people may not mind this, but I'd have been asking for half my money back. It's farces such as this why I just don't bother with NWAF and give my money to the pubs which, as I'm sure all would agree, put on a superb show this year with around 300 different beers between them!

Boak - I only managed this by cutting and pasting. No idea how to do it through Blogger.

Gazza - It is an annoying restriction but we are stuck with it. I can just about understand why a pensioner might complain in case they lost their seat, but I don't believe most people felt it too onerous. I doubt if it would have affected you one bit, not that you'd be there in the first place.

If we could find a bigger venue we could afford, we would. The problem with the UK is a lack of venues.

Okay, Gazza Prescott: you organise the NWAF festival next year in Manchester and show Tandleman how it's supposed to be done. Venues of the necessary size aren't two a penny, you know.

Firstly, drinkers could get between the two bars with an empty glass during office hours, but the rest of the time you could go where you like with a full pint, as I did. The solution during office hours is drink up before you move to the other bar ~ perhaps an inconvenience, but nothing more.

You're like the person in the pub watching the football who knows better than the referee, and the manager, and the linesmen, etc. Try actually doing the job.

I think you've made your point. Gazza is entitled to his opinion though it would have been more convincing in this case if he had experienced the actuality himself.

It wasn't perfect. We know this. Whoever designed and whoever signed off New Century Hall on behalf of the Co-op should be made to watch how it operates in practice for those hiring it.