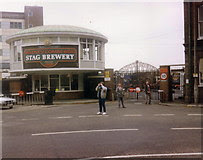 © Copyright Stephen Williams and
licensed for reuse under this Creative Commons Licence.

Seems that the last vestige of the old Watney Mann empire will be swept away in 2010 with InBev's proposal to close the Budweiser plant at Mortlake, formerly Watney's Stag Brewery. The company adds all the usual weasel words that always accompany such things: "no reflection on our workforce", "changing market conditions", "increases in taxation" "need for synergies after our takeover of AB" etc. etc.

It is always sad to see a brewery close, but this had an air of inevitability about it. A declining brand, a large and expensive brewery and the need to pay for a takeover. Nobody will miss the beer which will be trunked in seamlessly and tastelessly from elsewhere - though goodness know where that elsewhere is - but people will lose their jobs. That's never a cause for celebration. Maybe this is the beginning of the end for Budweiser in the European market, where it has no real following anyway. The King of Beers? Seems to me more hollow a phrase than ever.


The Stag Brewery in Mortlake, West London, which employs 182 workers, dates back to the 15th century and is one of the oldest brewery sites in the UK.
Posted by Tandleman at 11:10

Perhaps uniquely in the European market, Budweiser is enormously popular here, where it's brewed by Diageo (in their Kilkenny brewery, also scheduled for closure) and occupies roughly the same place on the market as Stella does in the UK: that scary bulldog-shaped bloke in the football shirt down the end of the bar -- he's probably drinking Bud.

Ah yes thanks. I overlooked Ireland in my remarks.

Sod the 'King of Beers', what we need is a Lord Protector of beers!

It's always sad when workers lose their jobs. I think it was Harold Wilson that said something along the lines that it doesn't matter what the percentage of unemployment is, to the unemployed person it's 100%. Weasel words always hide capitalist greed.

Though if I'm not mistaken, capitalist greed is the only kind that produces beer at the end.

I live and work in Mortlake

I am working as Man With Van in Mortlake

I have big van and its clean and i have lot of straps and blanks to protect your stuff.

I am hard working and help with loading and unloading too.

So if you need help with moving please remember my website