The Wembley Weekend (see below) is always chosen carefully to maximise the potential of finding decent beer in a variety of good pubs. It doesn't always work out that way, such are the vagaries of cask ale, differing tastes and the quality or otherwise of the local beers we encounter. Worcester and Bewdley looked promising though. 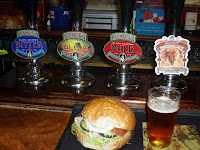 Our first stop - and don't worry this isn't going to be a list of pubs, but a recall of highs and lows - was the excellent little Black Country local, the Bull's Head in Sedgeley. Bustling and busy on a Tuesday lunchtime, the welcome was warm as we exchanged banter with the locals, trying very hard to follow a dialect that was a thick as the crusty cobs we ate. We enjoyed the place a lot and listened to the tale of the local Wetherspoon's being firebombed earlier in the week, with some amazement.  (The Bull's Head is opening at 9 a.m, to compensate the thirsty.) Holden's Mild was a dark delight, though the bitter is too sweet for my taste. The Golden Glow and the Dragon's Blood were both deliciously hoppy and balanced, with the Dragon's Blood being surprisingly pale, though I am sure no-one really knows a dragon's blood's true colour.  Three and a half pints of mild plus four giant cobs - see photo - were just over a tenner.  Value and then some. 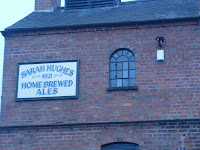 Surprisingly our next call, the classic Beacon Hotel, home of Sarah Hughes beers and an old friend to us, was poor. Again busy for a Tuesday lunchtime, the beer was on a low, with the Amber tasting infected and the famous Sarah Hughes Dark being nearly as bad.  We struggled through our beer and beat a hasty retreat. A great pub though and surely just an off day? 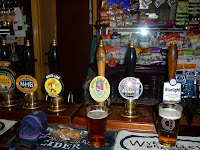 Our final pre - Worcester call was another great pub which didn't disappoint.  The Waggon and Horses in Halesowen is a corner street local with fourteen handpumps, foreign beers galore on the bar, four cask ciders, as well as a carefully chosen list of foreign bottles. What's not to like?  The two young lads serving us were enthusiastic, knowledgeable and had obvious pride in what they were doing. They were helpful without being patronising and talked us through what they had on sale and what was on particularly good form. Beers from Nottingham, Oakham and White Lion didn't disappoint. Real Black Country pork scratchings were a perfect if tooth jarring accompaniment. We left with reluctance.


Next was Worcester where the picture changed. For the worse unfortunately.

The giant cobs, filled and I mean filled, with good quality cheddar or ham were £1.20 each!