I had the chance to compare three widely spoken about beers last week, though not all at the same time.  First was Marble Dobber which I have already mentioned was voted Champion Beer of Greater Manchester last Friday.  This is a terrific beer for the hophead. It is intensely, resinously, bitter, but by no means one dimensionally so. I guess it has a progressive and complex hopping regime. given that it grows in hoppiness throughout, to a lip smackingly resinous and lasting finish.  It drinks all too easily for its 5.9% strength and deserves the often used, but easily understandable descriptor, "dangerously drinkable".

I was advised in advance the the Waterhouse had Jaipur IPA - also 5.9%, coming on, as one of my co-workers at MFDF had supplied a pumpclip for it. I took Eileen with me on Saturday and after fighting our way through good natured cider and lager drinking Rugby League fans from Leeds and St Helens, in town for the big match, a pint and a half was procured.  As always this beer wasn't clear. I have come to the conclusion that this must be deliberate. I have never had a clear pint of it, not even at Thornbridge Hall.  "You don't drink with your eyes" I hear some cry. Well, effectively you do.  Appearance is most certainly part of a beer's appeal - ask anyone who has judged beer - and to me this just doesn't look the part.  I have to say it didn't live up to its hype and again, with the exception of a few good pints, to me it rarely does.  Sure it had bitterness, but this fought against the sheer underlying sweetness of the beer. There was some citrus from the C hops, but overall it underwhelmed.  The finish was sweet too and faded almost immediately. 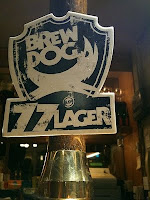 A new discovery for me is the M&B run Wellington, which along with its companion pub, Sam Smith's Sinclair's Oyster Bar, has peripatetically shuffled round Manchester City Centre. I say new, as I haven't been in it since its second move from Shambles Square.  A tip from a fellow CAMRA member took me in there in Thursday. I was impressed by the beer quality, so took the discerning E for a visit.  On the bar was the 4.9% Brew Dog 77 Lager.  It had to be ordered, as I see cask Brew Dog all too rarely.  Firstly it was a much darker beer than I expected. It was well conditioned, full bodied and rather malty with developing bitterness, through to a decent bitter finish. It didn't seem to me to have many lager characteristics at all and I wonder if there are slightly - or even completely - different versions brewed for cask and bottle?

So conclusions? Well none of this is scientific, but my feeling is that in their quiet understated way, Marble are producing spectacularly good beers and while keeping a low profile, are going from strength to strength.  That's fine as it's local to me. The others? Well, on this showing, Jaipur didn't come out too well, but so many people rate it so highly, I keep trying it whenever I see it, in the hope of being converted.  I'd like to try another somewhere else, as I would with Brew Dog, though I have to say the 77 was very drinkable. Let's see more of their cask in the North West please. In cask I have rarely been disappointed with their beers.

Disgracefully Sinclair's has had cask removed and I bet they sold more than an eighteen a day. Is Sam's becoming more or less a totally keg brewery?  If so, a pity, as they have some really fine pubs.
Posted by Tandleman at 08:32

You know, I haven't been in the Wellington in years, not since they relocated it from Shambles Square, anyhow. I'll obviously have to give them a go next time I'm in town, sounds like they're stocking some decent beers. What else did they have on offer when you were there?

(1) Jaipur is overrated. If you haven't been converted yet to the notion that it's the Second Coming, I doubt you ever will.

(2) According to the mamager at Sinclairs, they were one of the top selling cask pubs of the Smiths estate-go figure. The Wellington has been quietly building up its reputation for some time. It's handy for Victoria and has much better food and beer than Sinclairs.

2) Sam's? Pah! The Welly is good. I like the feisty Salford barmaid with the big gob too. Real old fashioned type.

Apologies that the pint of Jaipur wasn't clear, the new brewery has seemingly put paid to the clarity issues, so interesting to hear that this isn't so.

As well as brewing at Thornbridge, I also run our brewery tap and it's been as good as gold here. Will get someone to call the Waterhouse to check it out.

Jaipur isn't for everyone. The only folk who have hailed it as the 2nd Coming are those that write about it on the internet or enjoy a pint of it at their local. We love brewing and we love beer and think that Jaipur is testament to that.

We've never been a brewery that thinks we should give away beer so that people can write about it, but are always stoked that people do, whether it's good or bad, at least it gets people chatting about beer. That's job done!

Thanks for reading and replying Kelly. Very interesting.

The Marble Arch proudly serves Thornbridge beers next to our own whenever we can get them, and Jaipur has been nothing less than bloody lovely (and bright) every time we've had it. Thornbridge remain one of my favourite breweries and I suggest you try it next time you see it in the Marble Arch, where beer is lovingly cared for and bought from the guest brewery directly.

Glad you like Dobber by the way. We do too!

Ah well Dominic, I must just have been unlucky then, but never mind, I'll just sup your beers instead, which won't be a hardship.

But I will try Jaipur next time I see it in your place, though I don't think it has co-incided with any recent visit. If it had, I'd have tried it.

PS Pint was excellent too at MFDF and would probably have won if it had been entered instead of Dobber - in my opinion of course.

I jointly looked after the beers, as well as chairing the initial panel that put Dobber through to the final. At least I got these bits right.
(-;

Herr'man, will you be drinking any of Prescotti's Hop Manifesto? I'm curious as to how it turned out.

The lager sounds like a pint of bitter to me. It's wrong. Let bitter be bitter, let mild be mild, let lager be lout.

Hi mate. In my recent trip to Edinburgh post, i too lamented the fact that the 77 lager on cask didnt seem very lagery. Could be another version, who knows? Maybe one of the lads from BD will clarify, as Kelly did earlier on. But at least I know I'm not alone!!

Sausage - Haven't seen any Steel City stuff yet. Leigh - not very lagery at all.

Steel City first batch due out this week, I believe.

The first time I had Jaipur was a few years ago, in a pub that really knows how to look after their beer (Old Harkers, Chester, part of the very good though pricey Brunning & Price chain).

My brother paid a tenner for 2 pints & 2 small ramekins of home-roast peanuts. We were a bit stunned by the price but overwhelmed by the beer - it was utterly delicious. We went back for more beer (no peanuts!).

I've been massively impressed with the Marble beers I've had recently. Pint and Dobber are both wonderful beers. And it's good to see young brewers making such good beers.