I've been following the Brew Dog "share float" stuff with great interest and not a little incomprehension. I haven't coughed up £230 for what seems to be a  chimera; no not the fire eating monster, or the antibody, but the "fanciful mental illusion or fabrication."

There is much to admire about Brew Dog. The cocking of snooks at the authorities, the viral advertising, the excellent attitude to beer and what it should be like and most importantly what it shouldn't be like and, of course, their cutting edge beers. And they are Scottish; not from the posh part of Edinburgh, or Glasgow wide boys, but from Fraserburgh  for God's sake. What's not to like? Nothing of course.

What is ground breaking, (some may say odd) is the way they are using their viral advertising to lure supporters in to buy their share issue, "Equity for Punks". It is clever, it is interesting, it isn't sold as an investment, more a sort of "give us some money now and we'll be nice to you and maybe give it back to you sometime in an unspecified future" kind of way. It is open, it doesn't make false promises and all is therefore well. Or is it? 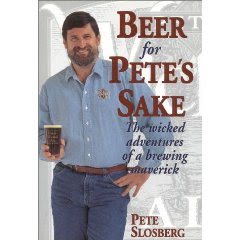 The reaction of some bloggers and followers of blogs is along the lines of mass - well not mass - maybe "selective" would be better - hysteria. Sort of "You are nice guys, I love your beer, here's my money". It is either noble or foolhardy, but maybe tilting at windmills in such cynical times isn't such a bad thing, though it seems to this writer that these shy Scots have the chutzpah of Del Boy. In an unassuming way of course.

Has anyone asked the obvious question which is " Why does the brewery need to be ten times bigger? Will that make the beer better? Will it increase innovation? I have an analogy. Anyone remember Pete's Wicked Ale? Pete Slosberg was the Brew Dog of his day in the US. He broke moulds, he innovated, he became the second biggest craft brewer in the US, then in 1998 he sold the lot to the giant Gambrinus Company who make his beer in a non innovative way, in whatever brewery they care to. I dare say its still pretty good beer, but you take my point. It isn't innovative or cutting edge anymore. It is though big and Pete has presumably got lots of money out of it.

Not that this need apply to Brew Dog of course, but I'm just saying, that's all.  Strangely though even I'm slightly infected. There is a tiny bit of me that wants to chip in too. Seems I've also been touched by the virus, but I'll resist.


Much is made by Brew Dog of their new shareholders, but I've never heard of Skyy Vodka and if they've got a billion from selling it..............?

Can I have a word Herr'man? I drank Pete's Wicked Ale in it's heyday. It was categorized as a Texas Brown Ale. It was a gorgeous, big, chewy, brown ale that was dry hopped with East Kent Goldings. The crap whoever is brewing it now, is absolute shit.
Another boring, bland, contract brew. Yes, you dare say it's still pretty good beer!!

I totally agree with this. Good luck for those on board for the ride, but no thanks. I'll just buy the beer.

The sudden use of scantily-clad female bods in marketing material and in person at the event chimes with Skyy vodka campaigns in the past (the new big investors sold Skyy in 2007):

But I wish them well. Wouldn't deny the chutzpah charge but they were charming (and not in a Tony Blair way)

I'll stick with Freevieww vodka, thanks.

SAusage. For goodness sake, there is a difference between I dare say it is and daring to say it is. Geddit ?

SAusage. For goodness sake, there is a difference between I dare say it is and daring to say it is. Geddit ?

No, I don't get it! It's a shit beer. Being polite about shit beer doesn't cut it.

I thought the marketing photo was a pretty direct lift from the cinema scene in "the great rock and roll swindle". Quite clever I thought.

My only Scottish friend is from the post part of Edinburgh... aren't the others all like you and Rab C Nesbitt? ;-)

I'm not sure that what you are saying is incorrect, if cynical. Will the bubble burst and I'll loose £230? it's possible. Perhaps I'll make it back, I don't know. There is always the possibility that the whole crazy thing will work and I'll double my money.

Of course if they do sell out to some bigger fish in 10 years time I'll likely be better off. If my share only manage to maintain value then it's probably because they have refused to go down some corporate line and are still making cutting edge beers.

I mentioned on another blog that it has some similarities with the King of Shaves bond issue in that it is a way of bypassing traditional sources of finance by going directly to the public. Hard to tell really whether it is inspired financial iconoclasm or a bit dubious.

I kind of think that it might well be a reasonable bet, for that is what it is a bet. I don't think that Brew Dog have ever been a brewery that planned to stay small. I suspect they have world domination on their minds.

There's a missing post from Jeffrey. Don't know why. If it doesn't appear, I'll copy it. It is very sensible.

Well, here it is.

Peter, you seem to be taking a sensible view on this. Well done.

Indeed. Sensible is my middle name.

"No, I don't get it! It's a shit beer. Being polite about shit beer doesn't cut it.!

Just come home to this, Come on Whorst. You are showing the lack of reading comprehension skills I've mentioned before.

Sorry mate, but you'd be down on me like s ton of bricks if it was me. I'm not saying Pete's is good. That isn't the point.

Yes, sometimes I jump the gun a bit.
I had a very strong affiliation to that beer for years, until Slosberg sold his soul to the devil. I felt the same way when King & Barnes disbanded. King & Barnes Festive was amazing.

I dare say that early/mid-1990's PWA wasn't even that great. It was a brown ale, and drinkable, but no big deal. For those stuck outside the US' better brewing regions, maybe it was a great competitor to SABL or something, but to Oregonians...I bothered with it maybe a couple of times.

Woolpack Dave: - I think you are missing my point a bit. Think big picture here. It isn't about the money. I don't doubt the good intentions of Brew Dog, but the intended outcome of achieving "bigness" isn't likely to lead to a happy ending. That's what I was saying in my post.

The road to Hell is paved with good intentions etc.

Jeffrey - Me like Rab C Nesbitt? Never. I'm more like the guys from "Still Game" these days.

Tandleman, I don't think I miss the point of your post, I just didn't acknowledge the point in my comment. I do agree with you on everything you say in it.

The counter argument to the road to hell thing is that nobody got rich on altruism. I'd like to think these guys might find a compromise, but of course they might not.

Thanks for patience on my word blindness - hopefully between you and Beer Nut we'll get it sorted!

Peter, the reason you think my comment was missing is because it's on the previous post - not this one...

Ah my bad as the Yanks say. That certainly explains it. Still, it applies equally. (Big Smiley.)

They may be innovative brewers etc etc but their online shop is practically empty. I've got a pissup to organise and I know some bigwigs read your blog, so someone out there get it sorted!