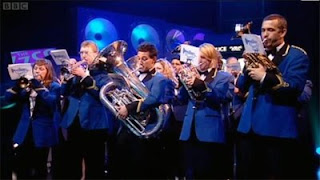 The daft antics of Oldham Council have made headlines before, with allegations of exceeding their authority and other incompetencies, all under the guise of cutting disorder and increasing public health and safety, but I heard a new one on Saturday.

I was visiting the Landlady in her new pub and mentioned a bunch of us from her old pub would be coming up to the Brass Band Contest on Whit Friday. This extravaganza is held throughout the villages of Saddleworth every year and attracts thousands of visitors. It is free and a lot of fun. Naturally the odd libation plays a part in this and it is a money spinner for the local pubs. My mates are already anticipating the pies in one pub as a yearly treat. This year though it seems it may not be possible for them to enjoy this little pleasure.

The Landlady tells me that on Whit Friday, the Police, at the behest of the council, will be enforcing some conditions for those pubs wishing to be open from half past four onwards (the start of the contest). In her case she will have to have two doormen on each entrance from four o'clock until closing. She will be limited to 75 people in the pub at one time which will be administered by the doormen clicking customers in and out. The cost of course will be borne by the publicans. It seems that similar notices have been served on another dozen or so pubs on the band circuit. The Landlady reckons she can't make money on that basis and in all likelihood won't be open that evening. She reckons some others will do the same.

Now it may be that it isn't as bad as all that and the pubs will open albeit with restrictions, but this is a brass band contest attracting the middle aged. It isn't a source of drunken thuggery or anything like it. Why on earth does the council and police think they need to poke their noses in and quite possibly spoil or at the least make it more difficult for everyone?

If you look at the Oldham Council web site, you will see the following objectives:

The Act is supported by four statutory licensing objectives:-

Yes the prevention of public safety is a licensing objective on their web site. Incompetents.

Update - the council has corrected the error on their web site now. And it did say that, as I cut and pasted directly from their site to mine. The power of the blog!
Posted by Tandleman at 16:52

How many times do these people provide evidence that they've got all caught up with the 'Authority' bit at the expense of the 'Local'?; usually aided and abetted by the local Police Authority, who seem to like wearing riot gear and locking down areas than engaging in crime prevention - better overtime, dont'cha know?

Hang on, the prevention of public safety? Really?

But stupid typos aside, this is what annoys me about our new licensing laws. Supposedly the licensing act 2003 was to make it easier for licensees to do things. However, since the councils are now in charge, rather than magistrates, they able to put whatever silly arse covering rules in place they like.

This is a classic case of if it ain't broke fix it till it is.

Encourage people to make a fuss - if there's been no real history of trouble, then why worry now?

The Council is made up of either employees paid for in part by local Council Tax payers or are elected representatives of local people.

It sounds just the sort of community-oriented thing that local councils should be supporting.

Our local council has helped to fund a cracking food & drink fest but in the past also seemingly tried to ban an annual charity motorbike rally through the borough, however the organisers' persistence & public support of the event overturned that decision.

(I love your council's typo too!)

I'm no expert, but I think it's distinctly possible that the council is exceeding its authority. Perhaps the affected licensees should try to get legal advice, which can often be free through trade associations and trade unions?

TM: if you're an associate PCS member, perhaps you could!

Surely Oldham Council are over-stepping the mark here? If your landlady normally opens her pub during the afternoon, then that opening is part of her permitted hours, and just because there is an event (hardly a riotous assembly) taking place in the village, then the local authority have no right to unilaterally impose onerous conditions on her normal lawful activities, or indeed tell her how to run her business.

This really is an appalling example of local democracy doing the exact opposite of what it is intended to do, and I hope that if this ludicrous decision is upheld, local businesses will put in a full claim against the council for loss of earnings.

I agree, but not my business to do so Nev.

Secondly Paul, I am sure you are right but the fight would be costly and most just won't bother.

Wait. We get a Whit Monday here, which is nice enough in this season of a day or two off every couple of weeks until about August, but you lot also get FRIDAY?

Not a day off Nick. Well it is for me of course.