Yesterday took me briefly to the "wrong" end of Central Manchester. I was down to do "postering" for the National Winter Ales Festival, so I met with the others in the Knott Bar. I have been a bit overdosed on Lees since my illness prevented me from travelling, or rather, knocked the inclination out of me. It was cheering to start off with a very pleasant pint of Marble's Manchester Bitter. Pale, hoppy, full bodied with biscuity malt, it was just the dab for jaded taste buds. Alas it came to end before my request for a second could be fulfilled. Damn. Dilemma. The other beers were dark except Hornbeam Lemon Blosson which I had condemned in no uncertain terms before here. Still, being a very forgiving type, I plumped for it and was pleasantly surprised. The artificial "lemon" taste had gone, instead a clean, zesty beer was very welcome.

We soldiered on visiting dingy back street pubs, sticking posters up and leaving "flyers" with snotty concierges until our second beer stop. Unfortunately in the Atheneum, an impressive former banking hall, they couldn't get the Young's pump to cough up any beer and we eschewed the alternative Bombardier and had little better luck in either the Waterhouse or the City Arms where all beers were dark. We pressed on with the job and eventually, having knuckled down and completed our tasks, we finished in the Crown and Kettle where excellent pale pints of Titanic Iceberg were consumed and repeated. This brewery has come back on form after a dodgy patch I reckon. As an aside I also tried a half of Cheshire IPA from Dunham Massey which proved to be overwhelmingly, sweet and cloying and hoppy at the same time. Like most of their beers, not for me.

Two more ports of call though. The Angel brought us pints of Allgates New Year Ale which was d 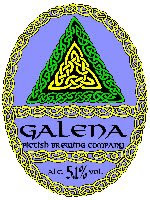 ecent but not inspiring though the usual charming and excellent service here causes me to make huge allowance. Finally on to the Marble Arch where we were told one of the beers of the century was on, a new beer called Brew 1425. This pale, 5.9% golden beer of over 50 units of bitterness was powerful in the aroma, hugely hopped and bitter, but for me harsh, unbalanced and hard to drink. Others had raved to me about it, but for me it just didn't work. I really was disappointed, though perhaps another time would have been better, but this is a "one off". Things were redeemed for me by the excellent Mallinson's Matterhorn which was fresh, lemony and zesty with a good hop finish. I had my last beer of the night from another old favourite, Pictish. This time Galena. Somehow Richard Sutton the brewer drags every possible nuance out of his hops. This was no exception and was very hoppy, very pale and a great beer to end the night on.

And hooray for First Bus. The 163 came immediately! There's a first time - no pun intended - for everything!
Posted by Tandleman at 13:03

this blog is too manchestercentric

I think this blog is just fine. Perhaps a visit to a nice remote Lakeland Inn that has it's own brewery would make it even better.....

What does the anonymous one expect when the author lives in close proximity to the city!?

It's a good read as far as I'm concerned, a Manchester ex-pat in Newcastle!

"this blog is too manchestercentric"
Don't worry, let January take its toll.Then it will be Evertontastic slightly bombastic after we beat all those others!
Liverpool,Man Utd, Arsenal.
I might be celebrating hard.Alternatively I will be looking for solace. Hoping for happy bays

Will you be at the National Winter Ales festival on the Friday? If so, I'd love to meet and maybe have a chat over a good pint.

Bombardier. A beer to eschew.

The winter is made for dark beers! I spend my whole time trying to track them down while you do your best to avoid them! :-/

Dubbel - a myth. While I like dark beers as much as the next man - depending on who that is obviously - I still like a bit of pale and hoppy anytime. As I said I had overdosed on Lees Bitter and the very dark Winter Warmer.

Anonymous - I'll be there all the time. I am the Deputy Organiser!

Boak - Indeed a beer made for that as in "avoid and stay away from deliberately; stay clear of"

Good-o. I've never had Lees Bitter before (shockhorror) and didn't realise it was that dark. All the best for the NWAF.

It isn't that dark, but it isn't very pale and very hoppy which is what I craved!

Looking forward to getting some of that Thornbridge Russian Stout if there's still any left...

Greene King IPA (but not the Abbot Ale oddly enough), Ruddles County, Bombardier and a few others are all worth staying clear of.

I particularly dislike Gunpowder Mild - which is a shame as it's always on at my local. Oh, for a pint of Theakston's Mild, Moorhouse's Black Cat or (especially) Copper Dragon's Black Gold.

Greene King IPA (but not the Abbot Ale oddly enough), Ruddles County, Bombardier and a few others are all worth staying clear of.

I particularly dislike Gunpowder Mild - which is a shame as it's always on at my local. Oh, for a pint of Theakston's Mild, Moorhouse's Black Cat or (especially) Copper Dragon's Black Gold.

Anon - just had a fantastic pint of Copper Dragon Black Gold at the New Bridge in Newcastle. No sparkler though, but at £2.06 I'm not that fussy ;-) The beer range there was a little disappointing though, with all 4 of them being dark and two of them 5%... I was in the mood for something a little lighter.

Re: beers to avoid - I'll happily drink a pint of Bombardier in order to avoid the Youngs atrocities. Agreed with Greede Kerching IPA, even if it is 99p a pint at McSpoons.