Tyson has already mentioned our somewhat odd outing to Ramsbottom to allegedly sample trial Thwaites beers. Instead we were treated to a kind of bizarre charade, with only one trial beer being available of the four offered, not that we knew this at the time. It is strange though how, when you are advised that you are drinking Thwaites beer, that your mind closes to the possibility of the beers sampled being something else. Both Tyson and I recognised that one beer was chock full of diacetyl and one other had an odd but familiar spiciness, without making the mental connection to say "Aha, These cunning sods from Thwaites have brought some ringers in, namely Deuchar's IPA and Greene King IPA." Now both of us I think can be excused the GKIPA blunder, as I doubt if any has passed our respective lips for a long time, but it just goes to show that you can fool some of the people some of the time, even a couple of hardened soaks like us.

Now I have to admit that the GKIPA wasn't that bad. You wouldn't want a lot of it, but it was better than the Deuchars and the Thwaites trial beer, which we placed a comfortable last. That at least serves them right. What came top? As it turned out it was none other than Taylor's Landlord. Now I'm not sure what the other several hundred (as it seemed) people came up with, but hopefully Thwaites will get the message that producing another bland beer in the hope of stealing some of the bland market, just isn't going to cut it these days. An odd night out indeed and a slightly perplexing one. 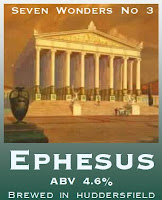 Last night was different. An old work colleague and I met for a limited time. We went to the Grey Horse in Portland St, Manchester, a tiny tied Hydes house. We drank the straightforward and easy going bitter. On this occasion catching up was all we wanted to do and the beer, for once, was incidental. A good perspective reminder.

Of course recidivist that I am, I couldn't resist popping into the Marble Arch for a quick half on the way to the bus stop. Mallinson's Ephesus gave me a last hop hit. I am never disappointed with their beers.
Posted by Tandleman at 09:50

"Now I have to admit that the GKIPA wasn't that bad" - not a surprise to some of us :-)

I was at this unusual event with Tandleman and whilst it is true GKIPA was not that bad,in my estimation it was still a distant 4th behind 2 mediocre beers and a cracking pint of Landlord...

All beers were in good condition (credit to Landlord McClung)but nevertheless GKIPA quickly became cloying and syrupy. When it tastes like this in top condition I fear for what it tastes like in average condition. If you live somewhere without any other choice I suppose you could stick with it but living in the northwest as I do you've got no excuses.

Coming away from the evening, the main gain for me was being reminded that when served in top condition TT Landlord really is a superb beer. One of the best. I've always liked Landlord but I think I've become used to it tasting half as good as it can taste. I can only presume it's a difficult beer to look after properly. Or perhaps because it's so expensive to buy, landlords keep it on long after it's peaked to squeeze every penny out of the cask?!