A Hour Out with Tyson 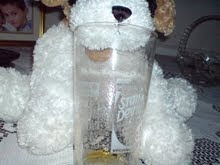 The Hare and Hounds Beer Festival at Holcombe Brook is the biggest pub beer festival in the country and despite needing two buses and a team of native bearers to get me there, I met Tyson for a review of proceedings.  I'll tell you about the beers later, but most were excellent and all served by handpump, with sparklers as God intended.

After we left the festival we went to Bury to drink some more. Two pubs later, I left slightly the worse for wear, for the 163 bus and home. Tyson was last seen striding to the Metrolink for a tram into town and a pub opening. He is made of much sterner stuff.  I fell asleep on the bus, waking with a start in the middle of nowhere. I didn't recognise a thing, so in my befuddled state jumped off at the next stop, only to discover I was on a dodgy council estate and on the right bus route after all, but nearly three miles from home. The buses are one an hour, so I walked.  Despite it being bandit country I didn't see a soul.

You have to be on blob when drinking with the Beer Hound.  Clearly I wasn't man enough for the task.
Posted by Tandleman at 10:33

Ah, its WAKING. That's not what it said the first time I read it.

That's what it said from the time I wrote it.

I don't walk on the bus if that's what you're implying.

Don't you have a taxi firm's number in your phone? You should have fastblacked it.

I'm no blob and I bet I could hang with him. I've got some pretty impressive man meat, coming in at 17.2 stone. Plus, I'm use to drinking strong, hoppy ales. I'm built like a cross between Charles Bronson and Oliver Reed.

It's just a self effacing Brit thing Sausage. Not to be taken literally.

And keep your man meat in your trousers! (-;

Good to see you and glad I could help you with your walking fitness regime.

Yes - I got my miles in after all.

Tandleman, I picked up the term from Irvine Welsh's novels, so no, it isn't a "Londonism". In fact, it's from Scotland!

No, it's from a man born in Scotland. Just because a cat is born in an oven, doesn't make it a cake.

It's hardly a Scottish expression or even one anyone is likely to have heard of.