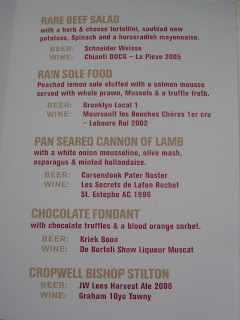 I have just returned from a night out at the Rain Bar, hosted by JW Lees our local brewer. The idea was to put beer up against wine in a foody menu.The event was compered on the beer side by Garrett Oliver, Brewmaster of Brooklyn Brewery, New York and a local wine guru, flying the wine flag. Beer won, unsurprisingly given the fact that almost all the guests were beer buffs of some sort. The menu was superb and the concept interesting. All in all a very informative and for me, different night and it was nice to get an invite.

I left full of food, wine and beer at midnight and stumbled into a taxi. Radio 4 was just finishing as I got into bed, hence the title of this posting!
Posted by Tandleman at 15:00

Bloody Hell Greville, Look at the footnote to the previous post.

That looks like a nice menu and a good attempt at matching with beer. I'm jealous!

Oh! I didn't read the posts consecutively & forgot about the footnote.