A Touch of the Unusual

It isn't often I get invited to a "do" at a foreign embassy or indeed a non foreign one, so when the Embassy of Ireland invited me to The Spirit of Sharing, an exhibition of Irish produced drinks sponsored by Bord Bia who promote Irish produce abroad.  On a night I happened to be in London anyway, I jumped at the chance.

Half past five arrival said the invite, so as I didn't want to be the first there, I wandered around the area abounding Green Park where there are many embassies of varying grandeur and arrived at 17.40. Fashionably late I thought, only to find the event already going like a fair. They clearly operate different rules here.  I bumped into an old pal, the 1970s boy himself Justin Mason and ascended the stairs to the inner sanctum with him.  Very large and rather perfect gins and tonic were smilingly thrust into our hands and we entered the merry throng to be met by Sid Boggle and not many minutes later by London Beer Guide man, Jezza, so at least I knew some people - not that it would have mattered such was the warm welcome from the assembled stall holders.

Canapés flowed - Irish produce of course showcasing, black pudding (gorgeous) and equally good ham and salmon and much more and I went for a wander to see what was there. Now the beer area was handily near the entrance, but most of the stalls were for spirits, with gin and vodka to the fore, but plenty of whiskey too and even poitín, still widely illegally made within Ireland I believe, but here, legally produced by specialists.  Irish strawberry wine too (Jason loved it), cream liqueurs and of course cider, all produced in Ireland by small outfits.  There was even two cocktail bars where you could try (I didn't) more exotic mixes. 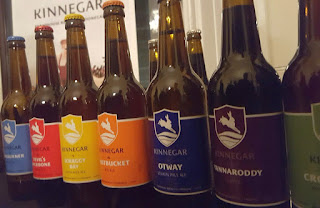 While I'm a beer man,  I must admit to partaking of several different, excellent gins, including a wonderfully earthy potato one from St Patrick's Distillery, but given that I have few opportunities to try Irish Craft beer - I mostly get my fix vicariously through the Beer Nut - of course I gave those a try.  The main stands were from Metalman and Kinnegar, where contrasting dispense was evident, with Metalman - rightly given the name - in cans - and Kinnegar in bottle.  Kinnegar had a range of around 14 or so (Jezza assiduously tried each and every one) and there was a few stunners from this Donegal outfit whose aim is "to produce clean, crisp, full-flavoured farmhouse beers."  Now clean is music to my ears and they were.  No muddy impreciseness here, but beers where you could pick out what was going on. Impressive and all beers are naturally carbonated and clear. I particularly enjoyed Yannaroddy Porter, though if they'd called it stout, I wouldn't have argued.

Metalman Brewery from Waterford seemed to have a bigger crowd around it for some reason and I enjoyed tastes of several of their beers, with the Pale Ale probably being the best of their show to me. I didn't take to the Equinox wheat beer which confirmed the difficulties that some brewers have in nailing this style. I'm still to be convinced about canning though.

One abiding memory of the evening was the sheer, cheerful enthusiasm of the stallholders and their obvious enjoyment of what they were doing. As well as the excellent craic, it was delightful to talk to such pleasant and committed people.  They simply couldn't have been nicer.

I get the impression that Ireland is shaking off the dominance of big brands at least in availability terms.  What I tried was of the highest possible quality. I do wish the producers that exhibited at this fine event the best of luck in the future.

Disclosure: I had a thoroughly good time.  I must also admit to trying more gin than beer overall. But I like gin and these were very good. I did see the ambassador too - didn't meet him sadly.

Great to meet some fellow writers and bloggers too. Jezza, Sid and Sharona. Justin I already knew.
Posted by Tandleman at 11:43

Yeah the gin boom here at the moment is something to behold. I try not to get too distracted. Nice to see my tax euros at work on your blog, btw.

Was surely worth it for the mention?

An RoI in the RoI.

There are some very good Irish craft breweries around at the moment. We should see if we can get some of the beer over for MBCF

The Irish will be making a return to GBBF this year, so maybe ask the organisers there.

Oh. That's me. What's the question?

Oh. That's me. What's the question?

"How do we get the Irish breweries at GGBF on the bar at MBCF?", I guess.

Something along those lines was what I was thinking.

Ireland gets better every year. Had some excellent Whitewater, 8 Degrees and Rascal in Newcastle (the County Down one) last weekend.