One of the things you can do on the background system to CAMRA's WhatPub, if you have the right permissions, is download all the data for your own CAMRA Branch area.  I gave it a go and did some number crunching, though I am fairly hobbled by being pretty unaccomplished at Excel. 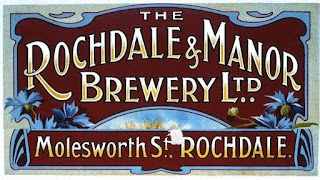 Now I expected a lot of JW Lees and there is. They have a total of 86 of their pubs in our area.  What fascinated me though was the number of Sam Smith's pubs we have. No less than 30, most of which, if not all, must have been acquired by Sam's when they bought Rochdale and Manor Brewery in 1948 and closed it in 1968, though it continued to be a Sam's Depot until the seventies. (Funnily enough one of my friends from the Tavern worked at the brewery itself). I reckon we (Rochdale, Oldham and Bury Branch) must have one of  best concentrations of Sam's pubs in any CAMRA Branch area.  In fact our geographical area may well be the top one in the country, depending of course on how you choose to define such things.

Now like Mudgie I have quite a fascination for Sam's though unlike that esteemed commentator, I spend little time in them, apart from when in London and I want a cheaper pint - or just a good old fashioned boozer.  I have though met Humphrey Smith and briefly exchanged pleasantries with him - well I was pleasant and he was sarcastic - but it all counts.

Sadly though we have 30 Sam's pubs, only 4 sell real ale, which is a great pity, but the brewery is very careful about which pubs get cask. Too careful some might say and something we, CAMRA, must talk about. In fact it was querying the removal of cask from the Yew Tree that my odd encounter with Humph occurred, but I digress. It seems though to me that a bit of fun can be had by visiting the remaining Sam's pubs I haven't been to. After all they are mostly handy enough.

I'll let you know how I get on. It might take me a while though. I really don't get out enough.

I must write up my Christmas tour of a few London Sam's pubs at Christmas. I'm a bit behind on that one.

Trip Advisor has interesting reviews of the food at the Yew Tree. You can pick out Humphrey's failed centralising the food experiment easily enough.
Posted by Tandleman at 08:00

Hmm, only 4 out of 30 selling real ale is quite a shocking statistic. All 4 in our branch area do, plus virtually all of those in Cheshire. I also think all but one of the 9 or 10 in York do.

Maybe it has something to do with demographic profile as much as cellar conditions.

Many are back street boozers in ethnic areas. Not sure what exactly is behind it, but maybe my tour will shed some light.

What do you need cask ale for? The 4 different lagers are enough of a choice.

Be interesting to see how much Pure Brewed I'll find. Suspect it won't be everywhere.

They don't all have all four lagers. For example, the Vine at Dunham Woodhouses has Alpine, Taddy and Pure Brewed, but not Double Four.

Availability of Wheat Beer is patchy, and India Ale is virtually unknown in the North-West.

No India Ale? Lucky escape. It is foul.

I've seen it in Sinclairs and the Angel in Leeds, but in both cases had already ordered OBB. I mean to try it some time.

The bottled version is lovely :-)

Thing is, even if the other 26 pubs out of the 30 had cask, it would only be OBB, and possibly not in great condition at that. They're in no hurry to restore cask even to pubs that could shift it. When Sam's withdraw cask from a pub, it seldom returns, at least down here.

Over the years a fair few Sam's pubs in central London have ditched OBB, despite surely maintaining enough footfall to justify serving a single cask beer. Office workers and curious tourists alone should do it.

Ultimately I have very little time for their 'Schrodinger's Cask' approach. For all their bleating about wooden casks and commitment to tradition, Sam's are essentially a keg-oriented brewery.

I don't understand why they haven't exploited this fact and cashed in on their reputation over the past few years of keg popularity, but then who knows what goes on up there, given their secrecy and commercial eccentricity.

Sam's are only a "keg-oriented brewery" in the sense that they produce in-house the lagers, keg ales and stouts that other pub-owning brewers are happy to leave to the big boys. In a pub with cask OBB, the overall cask/keg split won't be too different from a typical Marston's or Robinson's pub.

Keg is the future, anyways.

After a quick look at the Samuel Smiths tied houses i have done in the Rochdale Oldham and Bury Camra branch,these are the figures.

I have took photos of all but one.

I would like to know where the missing 6 are that i have not done yet.
I also do not mind drinking Keg Sam Smiths OBB,but do prefer the real OBB.

"Sam's are only a "keg-oriented brewery" in the sense that they produce in-house the lagers, keg ales and stouts that other pub-owning brewers are happy to leave to the big boys."

In the past 20 years they have brewed exactly one cask beer. They produce a fairly broad range of about 20 different beers. All but one of which are keg/bottle only, with no exceptions ever. Unlike every other regional cask brewer, they have apparently made a deliberate decision to never put their stout, mild, porter etc. into cask.

I don't really get how you can possibly compare them strategically with Marstons or Robbies, both of whom have a standard range of several different cask ales plus specials and seasonals (and in Marstons case multiple breweries and brands to maintain)?

The only brewery I can think of with an even vaguely comparable approach is Brewdog. Lots of different keg, lots of packaged, and maybe one beer in 'LIVE' keycask at any one time.

I'm not saying that Sams resemble Brewdog in any other way, mind, but one thing they have in common is that they are keg-oriented.

Not sure which ones are missing. Here's the list.

Thanks for the list.
Here are the Samuels Smiths tied houses i have done on the list.

The ones not done are

Grapes Heywood,which is surprising as i did a big crawl round the town.
Black Bull Rochdale
Kingsway Hotel Rochdale
Brown Hill Rochdale,i know this is up a steep hill not too far from the middle of Rochdale.
Royal Oak Shaw

I have made an effort to visit every Samuel Smiths tied house and am only missing 4 in London.

Blimey you are going back a bit. Still, I don't suppose much will have changed.

With a POTY winner, the return of Bass, some great pub names and 30 Sam Smiths pubs, I'm amazed you aren't marketing Rochdale beer breaks like those chancers in Norwich and Derby do.

The only Sam's pub I remember being in the Beer Guide is The Star, which I thought was a classic. Astonished it dropped the cask OBB.