OK. That's Barr's Irn Bru, but when it comes to pilsner style lager, Pilsner Urquell is the one that begat all the others.  It has been the original since 1842 and the brewery makes much of its history. As for taste it describes the beer as refreshing, clean and balanced, but the beer is much more complex than that. Deeply satisfying to drink, it has rich malt, spicy hops, hints of toffee from the trademark diacetyl finish - one that most brewer's wouldn't want in a lager, but is there in this one by design - and a very smooth finish. It belies its modest strength of 4.4% and its natural carbonation makes it very easy drinking. 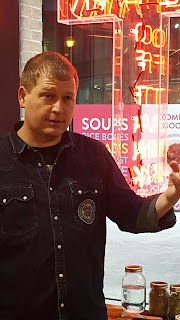 I was in London last week to see the Hockney Exhibition at the Tate and by good fortune it co-incided with an invitation by PU to visit the new Draft House in Plough Place and sample, under the tuition of  Beer Master Robert Lobovsky, the three different, approved pours that give different taste experiences. Along with Robert, Artisan Butcher Alex Sharp, talked about the prime Galloway beef cuts that we were to sample with each pour, fresh in tanks, unpasteurised and direct from Pilsen.

However this event wasn't about the taste of PU, as much as the mouthfeel and appearance of it, and there the complexity deepens. The head is absolutely paramount. The Czech classic Hladinka is a smooth, creamy serve, Na dvakrat has a crisp body topped with a thick foam and finally the Mliko is presented as virtually pure foam giving the most aromatic and sweet of serves.  It was all rather fun and the beers certainly did taste different. One interesting point to me was that the Hladinka pour is so reminiscent of the pour you get when a sparkler is correctly applied to well conditioned cask beer, with the head being formed at the bottom and the beer poured through it to keep it away from air. Think of that when someone carelessly pours you your next pint of flat cask.

Robert was a great host as was Alex. I did decline an offer to try pouring one myself. I doubt if it is as easy as it looks. Now my family comes from Galloway, so the meat was of particular interest and it was good to have an expert talk us through the cuts.  It was also good to bump into fellow invitees the Crafty Beeress and her husband and enjoy a couple of pints of PU afterwards with them.

So lessons learned - or in my case reinforced? Treat beer with respect and learn how to pour it properly and buy the best beef you can afford, even if it means less of it.

Tankovna beer is pretty widely available in London and elsewhere, particularly Albert's Schloss in Manchester which sells more than the rest of the UK put together. Thanks to PU for the invite.

The new Draft House has the same awful music as Seething Lane, but is a pretty good spot really.

It's worth beer blogging eh? Just for the free lager.

I've tried the Pilsner Urquell and I prefer it to Budweiser Budvar, but in both cases I've had them only in bottles, which are never as good.

I am told the Krusovice tank beer is pretty good too (can be found in Paddington and...somewhere else). Budvar and Staropramen are definitely not. Lovely to meet at last!

Sounds a great evening, drinking a world classic lager whilst enjoying some prime cuts of beef. I had the pleasure of meeting Robert Lobovsky, last August, at the EBBC in Amsterdam; a fine fellow, with a dry sense of humour. After having a go at pouring my own glass of Pilsner Urquell, I can confirm it is definitely not as easy as it looks!

I have to admit it took me a while to fall in love with Pilsner Urquell, even when I lived in the Czech Republic. It was probably my first pint of the tankove version that tunred my head, and then having the kvasnicove (krausened) version in Plzen made me a devotee. There are no so few beers I would rather drink. When it comes to other Czech lagers, even though I use the phrase 'Bohemian Pilsner' I kind of baulk at it, of the big Czech breweries Budvar is still my favourite and on those rare occasions it is on keg here in Virginia I and beside myself with joy. From the little guys though, I hanker for some Kout na Sumave or Zlata Labut in a traditional Czech hospoda...

You can definitely get Tank Krusovice in Kupp in Paddington Basin. To my mind its not a patch on Tank Pilsner Urquell - it doesn't have that nice spicy hit to it