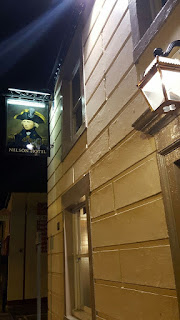 What has Admiral Lord Nelson got to do with Rochdale? Nothing it seems, other than I suppose being a national hero a long time ago.  So the Nelson Hotel in Rochdale, we can safely assume, is not actually connected to the one armed sea dog, but his likeness adorns the pub's sign nonetheless.  Until fairly recently it seems, the pub was run for many years, until his death, by a motor bike loving landlord who loved the TT races.  I often wondered as I went by on the bus, why the pub flew the Manx flag, but now I know.  Pubs can be interesting that way.

Anyway in pursuance of my endeavour of visiting (or visiting again in some cases) every Sam Smith pub in my CAMRA Branch area, I popped in on Wednesday night.  First problem was actually getting in. The door and passageway was blocked by an old geezer on a mobility scooter of bus like dimensions.  There was a bit of a stand off as we both considered the problem. He wasn't about to move and clambering over him would have been undignified, so I grabbed his handlebars and dragged him out onto the pavement.  Well I considered it, but he (somewhat reluctantly) turned his chair a little sideways and I scrambled around him with great difficulty and entered the inner sanctum.

It turned out to be quite a nice little boozer, with the bar facing you as you come in, a room on each side, one of which was nicely appointed, with a roaring fire and two old Asian gents, each dressed in a shalwar kameez, who appeared to have come in for a warm. Drinkless, they were arguing loudly in their native language. Kind of unusual even though this is a pretty Asian dominated area.  Inside the bar was another roaring open fire. Not often you see two in such close proximity. Even more so since there was only one other old codger within, soon to be joined by the door guardian who nearly ran his pal down as he reversed up the passageway into the bar, giving his companion's table a resounding knock as he did so. A few frank words in Lancastrian were exchanged, concluding with the traditional "Fuck Off."

No real ale here, so instead the somewhat 1970s illuminated plastic boxes favoured by Sams, showed three lagers, a mild, Keg Old Brewery Bitter and a cider.  I chose Double Four, but there wasn't any, so Taddy Lager it was, pleasant enough in its own way and a mere £2.20 a pint. Very reasonable for a 4.5% beer.

As I stood at the bar I surveyed the pub and decided I liked it. It was how pubs used to be and I reckon with a few in, it would be great fun.  I remarked to the barmaid who was busy putting more fuel on the fires that I wouldn't like her coal bill. Wisely she observed that as she was only the part time barmaid, that wasn't her problem. "Fair enough" I thought as I basked in the heat, taking in some rather good old photos of Rochdale and a decent tiled image of a sailing ship in the passageway.

Before I left my Asian companions did, and as I supped up, thanked the barmaid and departed, only the two old Rochdalians remained.  I could still hear them arguing as I walked down the road to the Regal Moon and Draught Bass.

I am pretty sure there is quite a step into this pub. God knows how the guy on the scooter got in.

This review here is worth a read.
Posted by Tandleman at 13:52

It's the colourful characters with ripe vocabularies that scare off the more middle class CAMRA types but bang per buck they are proper entertaining gaffs to visit. Were you offered knock off gear? You know you are accepted when the guy with prison tattoo says "ow do" and offers you stolen property.

Fame at last! One of my reviews featuring on Tandlemans blog High praise indeed., :-))

My train broke down at Rochdale on Saturday and with it being an hour until the next one, I struck out for the nearest pub. The Corporation was an experience for sure. Run down, basic and bare but not a visit I will forget. Just two other punters in arguing about the merits of Saturday night TV 'Why do you think I'm here, I never watch Saturday telly, it's crap' - 'How do you know if you're always in here?'
Still with time to kill I moved onto the Nelson, which you've described excellently. A nice low level hubbub, a few regulars at the bar, and a group of lads round the dart board.
The fire was roaring away and I was the only one in that room on the left.
Looking at the map of Smiths pubs I'm tempted by a Rochdale to Oldham crawl in summer.

In the years after Trafalgar, pubs all over the country were named after Nelson, so I don't think there's any expectation of a local connection.

I'm not aware there's any particular local relevance for the Shannon & Chesapeake in Todmorden, which commemorates a notable British victory over the USA in the War of 1812.

Oh, and Emma Hamilton was a Cheshire lass, so there could be a local connection there.