The Eagle is rather an imposing building and viewed from the outside, all lit up, it looked rather fetching as I trudged towards it in the rain.  I opened the door and everyone turned round to look at me. "That's a typical welcome in a Sam's house"  I thought. 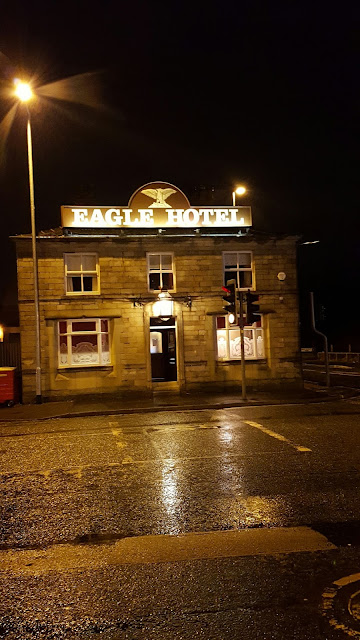 Number two on my wander round all the Sam's pubs in my area was the Eagle on, well Eagle St. Which came first I wonder?  I looked round after astonishing the company by my appearance. The bar was on my left, but was unpersoned. One of a group of four, playing cribbage shouted that he'd be with me in a minute, which gave me an opportunity to look round.  This is quite a big pub, but has clearly been diverted from its original layout more than somewhat.  The two large windows on each side of the door had obviously fronted two separate rooms at one time, but these had been knocked into one and the corridor removed, which gave a big sort of vestibule area with bench seating, reminiscent of a dentist's waiting room from the seventies.  It was rather Spartan, but clean and tidy with quite a busy red carpet, some dark wood and walls painted in magnolia or similar. An "L" shaped bar with brightly lit beer founts completed the picture.   A middle aged couple stood at the short end of the "L" drinking and chatting in low tones.  Behind them two old lads threw darts in a sort of large alcove dedicated to the purpose. In addition to the crib players, an old Irish biddy wandered around engaging with the cribsters and another two customers who were sitting down opposite the bar. That was it. All studiously ignored me, or had cancelled me from their conscious minds.

The barman finished his hand and wandered over apologising for my wait. On the bar was Old Brewery Bitter (keg), Sovereign Bitter (ditto), Alpine lager (unavailable) and Taddy Lager. Taddy it was and bloody fizzy it was too.  I sipped and watched. Everyone clearly knew each other, though I was undecided about the couple at the bar who took no part in proceedings at this point.  The Irish woman walked over and warmed her arse on the roaring coal fire adjacent to the card players. She asked no-one in particular if the clocks go back or forward this weekend.  There was some dispute about this, but it was finally agreed that the clocks go forward. The Old Irishwoman sniffed at this. "Forward or back, you shouldn't interfere with the fecking clock" she announced, eliciting no opinions either way.

From the back of the pub another person entered. It wasn't clear to me there was another entrance, but hey ho.The old lady had returned to her lair by the bar and the newcomer took his turn to warm his bum at the fire. In a different but similar broad Irish accent, he asked the pub at large if they liked his coat, which he had seemingly bought for twenty notes in the sales. This brought the two at the bar to life and as they pronounced. It was clear they too knew everyone.

The circle thus completed (I make the assumption the darts players were locals too) I drank up and slunk out. Did I imagine a collective sigh of relief as I left?

The chill cabinet contained bottles of Sam's Perry and Cider, plus a lone bottle of Pure Brewed Lager.

There was a picture of the pub in the old days on the wall, but the other couple were sat underneath it, precluding closer study. It looked similar though with its large scale sign on the roof.  I imagine too, the darts area was a snug at one time.
Posted by Tandleman at 12:45

it's the last generation of pubs before they disappear.