I often look at old blog posts to see what I was writing about years ago. A sort of  "On this day..." kind of thing. 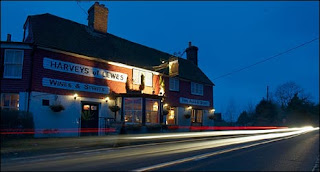 On this day in 2009 I wrote about the Bull's Head in a village called Boreham Street which according to the BBC was being closed by Harveys. It is an interesting and detailed little piece by the BBC and just as relevant today with the same old reasons being given for closure.  Then six pubs a day were closing and now it is probably a fair bit less but still around three or four.

At the time Harveys hoped that a buyer could be found to keep it going as a pub, but said "Pubs have been adapting for the past 1,000 years, but to adapt as much as we've had to over the past few years is asking too much ................ The pub's been struggling for a few years now. We have to decorate every five years, and each time we do, it costs three years income - that's income, not profit."

The article is still available on the BBC here and is well worth a read.  The whole sad story is laid out with a pointed reference to the fact that villagers bemoan  the loss of the pub but don't actually use it.  I finish my article by saying "You really do have to use it or lose it."

Reading my blog post again, I wondered what had happened to it. Eight years later would it be trading still? It seemed unlikely given what was said at the time, but I looked it up all the same. Amazingly it still is and even more amazing is that it is still owned by Harveys,  Judging by the website it is doing rather well which is good to hear.

What happened to change Harveys mind I wonder? Does anyone know?  Whatever it is, one thing still remains true. "Use it or lose it."

The pub is listed in the current Good Beer Guide and serves food every day. Looks all right too. It must be doing something right.
Posted by Tandleman at 20:39

I visited a couple of years ago and it was doing OK, as was the beer,just about). I was dropping some teenage off at a PGL activity camp half a mile away; perhaps they sneak out after hours and provide the custom (coke, of course). Near Herstmonceux and Battle so should get casual trade.

Kinda shows the value of those "x number of pubs are closing each day" statistics, doesn't it?

Why does it call into question the validity of those figures? They are based on actual closures, not speculation. And anyone can see with their own eyes that huge numbers of pubs have closed in recent years.

It doesn't mean much if they re-open again, though. The net reduction in pub numbers might be a useful measure, but closures on a per-day average aren't, unless you're looking for an alarmist soundbite.

Why does this pub feel that it must re-decorate every five years? Seems like an unnecessary cost.

And that cost is 3x annual revenues. Insane!!

One day it will close and all that will be left of it is dust. Even the memories of it will die one day.

Cookie: Take away the water and the fish will die!

Harvey’s do seem to have trouble either attracting the right sort of tenant, or in hanging on to good ones. About a year ago, a friend and I visited Robertsbridge, which is not that far from Boreham Street. The Seven Stars, a lovely old 14th Century inn at the far end of the village, which belongs to Harvey’s, was closed, and had been for some time.

There was talk in one of the other pubs of high rents and equally high business rates. I’m not saying the two are connected, or that Robertsbridge can support three pubs, but Harvey’s do appear to be making some strange decisions in relation to their tied estate.