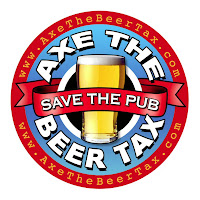 The "Axe The Beer Tax" campaign brings together all those with an interest in saving the British pub according to their website. The aims are as follows:

• To stop plans to increase beer tax by up to a third
• To enforce existing laws – not create new ones - to deal firmly with irresponsible drinkers and premises
• To end the irresponsible promotion of alcohol in supermarkets, pubs and elsewhere
• To trust responsible adults to make informed choices about what they drink, not punish them for the actions of an irresponsible minority
• To support the British pub as a vital part of social life in local communities. 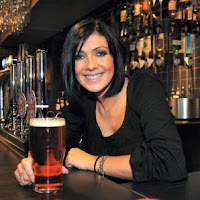 all in the public eye, there were a number of high profile launches last week, using rather fetching TV personalities. The campaign is supported by many groups including my own local brewery JW Lees. Others include Wells, AB, Punch Taverns, Diageo as well as many other trade big hitters. I am glad to see CAMRA's logo prominently displayed too.

Cynics might scoff at this, but I feel that action of this sort is very much needed and should be supported. You can do so by following various links on the site. If you agree, why not sign up? The worst that can happen is that the Home Secretary will send Plod round to have a word with you!

Don't worry about the cynics, Tandleman. A cynic is a person who whinges knowingly a lot, disparages all enthusiasm in others, but never actually does anything constructive.

My letter to Chancellor Darling is in the development stage. I'll investigate those links you have provided.

Kym Marsh is one of those "guilty pleasures" female slebs. Probably shouldn't but do.

I have been nagged by my Yankee mate Frane to put Jennifer Ellison up. Probably more Jeffrey's type.

Ah, not sure about that. Even for me she's a bit too obvious.

Generally I think Northern accents are a bit of a turn-off. I watch Hollyoaks with the sound down.

Probably a bit of a troll post, but I'll bite. Pot? Kettle? You have a pronounced North Eastern accent.

Tell me about it, it's a nightmare. About 1 in 100 girls find it irresistable. Sadly I only meet the other 99.

Northern Accents, North East Accents . . . you're all incomprehensible in your drink, anyway.

The cynics can just shove off as far as I'm concerned. This is one of the best campaigns for ages.