Back in the Groove - Sort Of 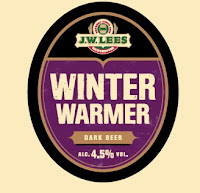 Tyson has already mentioned the crap bus service we get from First Bus who are rapidly becoming my bête noir. So yesterday was a mixed bag. Our route was one of a select few running, the bus turned up on time and my fare was waved away. His machine had jammed. Hooray. Of course this success merely helped redress a long balance, not in my favour. Our luck continued. One of the farmers picked us up and we had a bumpy but painless ride up the lane to our pub. There an odd scene greeted us. A motley collection of Second World War re-enactors and vehicles roamed around, somewhat like an explosion in the Battle of the Bulge Costume Department. My eagle eye soon spotted some unlikely combinations of German WW2 uniform. We fought our way in and found a corner at the bar, wedged between an Alpine Grenadier and an SS Sturmbahnfuhrer. Lees Dark was my preferred tipple at this point and proved to be smooth and moreish, so I had some more. The bitter once again hovered below par, but a new cask restored service to normal, though by then I'd moved on to Winter Warmer, a jet black, full bodied, liquoricey, chocolatey brew with a distinct East Kent Goldings finish. Very drinkable, but substantial for too much repitition.

The World War 2 mob disappeared to do whatever they do when not getting in the way in the pub and we settled into our table. The police called too, but this time not seeking drunk drivers, but interviewing witnesses to a glassing that had taken place elsewhere the night before. A frisson of alarm spread through some, no doubt due to the number of cars outside. Our lot had walked though, so immune to such things we carried on, by now back on bitter.

We walked down the lane in bitter cold, like the wise men of old, guided by a shining light that clearly seemed to be over Middleton. A second coming? I doubt it. Jupiter is VERY visible this time of year. It guided us to the Hopwood where I just had time for a pint of Theakstons Mild, which was excellent, before our expensive taxi home. The last bus had gone at around 16.45 so a taxi it had to be. Getting better is nicer than being ill, but a lot more expensive!
Posted by Tandleman at 12:42

Do you realise that with Stonch closed,your blog is no 1.And without any of the selective censorship that he practises.

Ooooh, that Winter Warmer is 4.5%. Practically an Imperial Stout.

I think you'll find Tandleman was already No 1!

jeff b's censorship and selective memory have rendered his blog a joke. it's now just an exercise in egotism run riot.

Jeff- It is the intensity of flavour and the fullness of the liquid that makes it less good as a session beer. It isn't all about packing alcohol in as you very well know!

Sean and Pussywillow. This blog will never countenance the sort of censorship you describe. I have been so subject to it that I won't be commenting on that particular blog again for the foreseeable future. What would be the point?

Quite right,Tanddleman. To be honest, I've given up reading stonch's blog. It became too fussy and inward looking some time ago and smacks of desparate self-satisfaction. Also all the adverts obviously aimed at telling us how important the site is.

When someone won't listen to you, why listen to them?