tour to Bamberg and other drinking parts of Europe. He was in Düsseldorf with his mob while we were there and we met up for a beer or three.

The Sticke Warriors were founded by Fred to pursue his love of Zum Uerige's Stcke beer. As Fred says in his site "One of my favorite places to drink beer is a brewpub called Zum Uerige in Düsseldorf. They basically only serve one beer - an Alt beer. Now it turns out that a couple of times a year they brew a special batch called Sticke - which is local slang for "secret." They don't advertise or promote it. On the day before, they hang a sign (in slang) that says "Tomorrow Sticke." I had never tasted this beer, so I asked the brewery when it was next going to be served, and it turns out the dates are not such a secret - the third Tuesday in January and October. So I decided to go (this was October 1988). And it turns out that three friends that are also homebrewers decided to come along. So was born Sticke 98." 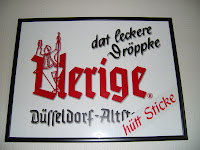 s more or less every year, usually to co-incide with Sticke night. In fact I met him there last year. This time he had twenty plus people with him. Though it wasn't Sticke Night, they had arranged with the brewery to have a barrel of Sticke held back and this was duly produced. At around 6.5% it is considerably stronger than the normal alt, but on this occasion, was a little too sweet and not entirely clear. I and Tom Perrera, another old mate who runs Knickerbocker Beer Tours and now brews at Webster's Brewpub in Duisberg switched to the normal and more refreshing ordinary alt. Incidentally, but interestingly, Tom tells me he has persuaded the owners of Websters to let him brew an American style IPA. Good luck to him on that one.

We left the warriors busily consuming vast quantities of sticke alt and equally vast quantities of pork knuckle. Next day we met Fred in Cologne. "Did you finish off the barrel?" I asked. "Yes" he replied with a grin. Well done lads!

I believe it was a 50 litre barrel. At 25cl glasses, that's 200 glasses. Respect to the Warriors!

I was interested to hear that you thought the Sticke was too Sticky even served fresh at the brewery.

Way over here in Portland we only get Uerige in bottles; I've only had the normal Alt and the Doppelsticke (8.5%). Like you, I preferred the normal one; the bottled doppel was just too syrupy.

I'm only catching up on my blog-reading now that I'm back in work after a long holiday. I'm sorry I missed the Sticke nights, but delighted to hear about Brauhaus Webster. Be sure to let us know if/when he makes the IPA. I'd try to arrange a trip there with my colleagues ;)