The Brewster of Huddersfield 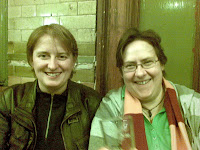 After a particularly long National Winter Ales Festival Meeting, the Organiser, my mate Graham and his Deputy, his mate me, tottered into the Marble Arch for something pale and hoppy to wash away the taste of the Draught Bass we'd been forced to drink in the Unicorn. We - all of us - not just Graham and I, had supped them dry of Copper Dragon IPA and Golden Pippin. The new nine of Pippin lasted barely an hour. It left Draught Bass, a beer that so resembled Pedigree that it might have been a tweak of it. We choked one down and had no more.

Back in the Marble, pints of the daftly named "Pint" were procured and a mate of mine grabbed my ear. "Let me introduce you to a couple of people you'll like". The two lasses turned out to be the owners of Mallinson's Huddersfield Brewery and we sat down to find out a little more. The first surprise was that she knew of me; "you wouldn't be Tandleman?" she enquired! It seems Tara (right) and her business partner Elaine (left) are readers and liked what I wrote about their beers when I visited Huddersfield. We had a pleasant half hour with them, listening to their beer philosophy - scrupulous cleanliness and lots of hops might sum it up. They welcome critical feedback and confirmed that I should tell it as I saw it. They regard all feedback as useful.

Graham was interested in just how many breweries are run by women. Tara knows a few and Graham was able to add a couple more. He has a notion of getting a few of them together at National Winter Ales.Not a bad idea if they are all as enthusiastic as these two!


There is a handy list of outlets on the brewery's web site. They are also doing the house beer at the New Oxford in Salford. I'll report on it soon.
Posted by Tandleman at 12:46

And Sue Harrison from Keswick brewery.

Her husband Phil helps sometimes as well, although I've never seen him do any work. Sorry Phil.

I've added a few brewsters I know to the list over on The Pink Boots Society site - www.pinkbootssociety.com.

A quick look suggests 10 working brewsters (I bet there's a load more) but not all are brewery owners.

The memory's not what it was, but I think I've had some good stuff from Sara at Brewsters & Pene from Wrexham's picobrewery - Jolly Brewer makes a great & diverse range (she's now also partner & brewster at a new Wrexham micro, Sandstone).

Its nice you used the correct term BREWSTERS.

still not tried mallinson's stuff - but read very postive things about it!