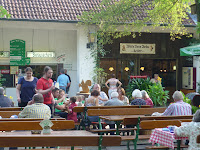 Passing the famous Schlenkerla Brauerei where the best known of Bamberg's smoky beers is brewed, you walk up another impressively steep hill to the Wilde Rose Keller. Now this former brewery's keller is big and it is popular, particularly on a glorious evening. It is all self service which is to my mind, how a keller should be. We got a good seat in the middle to watch the dynamics of it all - a most diverting pastime. First we obtained beer. For me kellerbier, brewery unknown, though it seems to be made for Wilde Rose. Bloody good it was too. For E, Keesmann Herren Pils which while maybe not on top form, supplied her with a satisfactory drink. To accompany this we had a "kellerplatte" from the food counter. Thick slabs of black pudding with tongue, ham of various sorts, pate, cheese, a touch of salad and thick slices of course rye bread made a veritable feast, though E wouldn't touch the black pudding. All for €5. the beer was around €2.00 a half litre.

A lot of people were eating. Some from the food counter and many from their own picnics, which is a traditiona 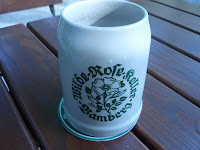 l and acceptable thing to do. These were most interesting. Old ladies all chipping in this and that while supping kellerbier and gossiping heartily, young families with their evening meal brought to be eaten in the dappled sunlight, a birthday party, with delicious looking (and huge) quantities of food, completed the scene with candles and tablecloths and stunningly pretty women. As the evening went on, the before work crowd of retired people made way for the after work crowd and families. One guy read a book while consuming a few beers and a kellerplatte and to our astonishment, later went up and bought a plateful of leberkaese - a meat loaf. Where did he put it? We were completely filled with our shared meal.

Later younger people arrived. All drank beer more or less. The atmosphere was convivial and jolly. It was delight to watch such a mixed crowd enjoying the outdoors and beer in such a civilised way. There was no horrid and unwanted music, no shouting, no drunkenness and no litter. The crowd was self policing, the children played happily in the play area while parents enjoyed a break. All was well with this Franconian world. We reflected sadly that such a thing wouldn't work in the UK. Our society just isn't structured that way any more.

We left with some regret. We had one more keller to visit.
Posted by Tandleman at 08:52

I very much enjoyed reading this and understand your point at the end.

Enjoyed your report on Wilde Rose; I must definitely visit Bamberg, especially as the beer prices are a Euro cheaper, per half litre, compared to what we were paying in Munich last week!

I too have been musing on just how civilised German biergartens are. This was highlighted by our recent trip, and our experiences and observations closely match your own. On a warm Sunday afternoon we visited Menterschwaige. The place was packed with people, imcluding a large number of families, all enjoying good beer, good food - from both the self-service stalls as well as those who had brought their own. There was a play area for the kids, and everyone was having a great time, without the slightest hint of drunkeness or trouble.

Later on we took a walk through the woods and then over the impressive Grosshesseloher Bridge that crosses the Isar River, to another biergarten. Waldwirtschaft was, if anything even more crowded. It was early evening when we arrived, and we were lucky to get a seat. Once again it was full of people from all walks of life, and from all age groups, united by a love of good beer and good company, enjoyed in a convivial outdoor setting.

Later in the week we visited Hirschgarten, not far from the centre of Munich, and witnessed the "before and after work" crowd that you write of. What a fantastic way to unwind after a hard day's work.

I'm afraid I have to agree with your last comment that such places wouldn't work in the UK. Leaving aside the issue of climate, and there is quite a big difference between summers here and those in Germany, a substantial number of people in the UK don't seem to know how to behave in a civillised fashion any more!

Oh well, we'll just have to pay a return visit to Germany next summer.

I don't think we ever made it to this one. Nice to know there's still stuff to find in Bamberg even after a few visits.

This isn't a wind up but with my rudimentary German I thought 'kellers' were underground yet your photos all show gardens. Must be missing something - probably a better definition of keller

Keller does indeed mean "cellar". In this case, though, it's the name for the beer gardens which sprouted up on top of or next to the lagering cellars which had been dug into the ground or the sides of hills. People started coming to the beer, rather than the other way around.

http://www.franconiabeerguide.com/drinking.asp is a nice little explanation of this.