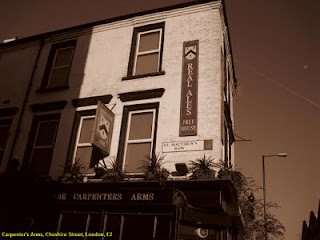 I am always looking for new pubs to try in London, particularly near our flat. Yesterday, being let loose on my own, I set off to Brick Lane for my daily walk and found myself strolling into the Pride of Spitalfields, hoping to find Crouch Vale Brewer's Gold. It was on, but a few degrees too warm, which had knocked a little of the condition out, but it was still palatable enough. I sat outside watching the amazingly varied passers by in this very multi cultural area, while chatting to a Cockney Sparrow, who had also availed himself of the sunny weather for some al fresco supping. This is one of the delights of pub drinking, the casual conversation about this and that which makes you feel part of things.

Continuing along Brick Lane, I noted with pleasure that that there are still a number of little Asian caffs where you can get a cheap curry based snack or a couple of samosas. These, like their Manchester cousins, provide value and genuine home cooking. Far better than the flashy lookalikes which predominate in Brick Lane now. Passing Truman's Brewery is always a bit sad I feel. The mighty place still stands, much as it was. The registered office with its black eagle emblem is still there, but it now is full of arty farty cafes, galleries and clothes stalls. Times change.

I pressed on until I came to Cheshire Street and went along, simply because I had never done so. More clothes shops and galleries, until I happened on a little pub, the Carpenter's Arms. It looked neat and clean, so in I went. It was a typical old back street boozer, gentrified and gastro pubbed, but in a pretty good way. Original fittings and bare boards had been augmented by pot plants and candelabra, to tasteful effect. I liked it. Three handpumps dispensed two beers from Adnams, plus TT Landlord which I had and which was excellent. In addition there was draught foreign beers, with Duvel Green catching my eye and a number of bottled beers too, some interesting, but all maybe a tad expensive. I was the only customer, so had a good look round. There was a room at the back too and I noted with some surprise an etching of the Kray brothers on the wall in the bar. The barman told me the pub used to be owned by the Krays, with their mother as license holder, as they were ineligible due to their criminal records. Interesting.

I had to try the Duvel Green, given that Boak and Bailey had talked about it recently and did so for a reasonable £2.50 a half. Quite spicy from the Styrian Goldings, soft and very drinkable, but oddly vegetal in the finish, I marvelled at how the alcohol was so hidden. You wouldn't know it was nearly 7%. It was good. I'll have it again and will certainly visit the Carpenter's Arms again too.

Walking back home, I slipped into a little cafe for a couple of samosas. Gorgeous they were, but 50% dearer than Manchester. Expensive place London, but yesterday was still perfect. Sun shining, a nice new pub and a walk round my favourite East End. Marvellous!

The photo is from the Carpenter's Web Site.
Posted by Tandleman at 08:40

I do like the Pride, it was always good for a lock in when I was staying in the area.

Yep. I've had a lock in there too, the night before a crack of dawn flight to Berlin. Unwise!

Was the Landlord served with a sparkler?

The Carp is my old local, though it was a very different pub 7 years ago. It was 'old' Bethnal Green, with a lot of light-and-bitter being drunk. It was run by an old couple and their big softy of a Rottweiler. I think they were a bit embarrased of the Kray connection, though the guv'nor did once tell me that a prominent associate of the Krays was killed right outside the door back in the 60s. The body was spirited away and is widely believed to now be part of the Bow Flyover.

The pub to had a special market licence and was open for practically 36 hours over saturday and sunday. I can't count the hours spent in there. Great times, and thanks for reminding me of them. The landlady cried when we move away.

"Arty farty cafes"? I think not. It's a bit sad that you feel that way, I feel. There are some great places in the old Truman's Brewery. It's fantastic that the old building is still standing and so full of life. It's a great reflection of what's so good about London: memories of the past remain, but the city constantly renews itself.

PS. I've been told The Carpenter's is one of many pubs with a Kray Twins connection... I think I heard they bought it the tenancy for a relative or something? Possibly bullshit, but there you go. I had a meeting with the landlords once. Moody bastards.

Jeff. My description was observational, not critical and there are loads of cafes. I very much agree that it's good to see it still standing and full of life.

According to Camra, TT Landlord is amber in colour.

Well, I could say I'm colour blind (like nearly 20% of males), but as I'm only red/green colour blind, that doesn't cover amber, so instead I'll just say I disagree with CAMRA ~ not for the first time!

Tandleman, "arty farty" is no an objective, observational statement. It's a pejorative term dripping in prejudice. That's fine - this is your blog, but don't pretend it's a neutral statement!

Good to see you back in typical form Jeff.

One last go. Why not? I don't have a pub to run. I was actually taking your point and publicly agreeing with you. What I was trying to say in my reply and clearly not satisfying you, was it wasn't intended to be critical, but descriptive. The brewery hasn't been converted to making motor cars or IT use, it isn't a city farm, it's not a dairy, a swimming pool, an IKEA or a football ground. It is full of cafes, people selling hand made and other clothes, jewellery, trinkets and hand painted or designed this and that and other such stuff.

OK I could have missed out "farty", but it's a blog for goodness sake. I think people who don't know it would have got an idea what it was like from what I said. I didn't use the word objective.

To describe the phrase as "a pejorative term dripping in prejudice" is something of an overstatement.

Glad you liked the Duvel Green.

Without wanting to encourage your curmudgeonly side, I have to agree that much of Brick Lane is both arty and a bit farty. And I mean it pejoratively.

The exploitative curry houses are arguably worse, though. Ever been lured in by the offer of a free beer with your meal only to be given a tiny little thimbleful of lager? Erm, no, nor have I...

Get over yourself Biffo.This may come as a shock but this is not your blog.No one gives a shit about your whining ridiculous comments.

I also would agree about Brick Lane and "arty farty" is quite appropriate, I'd say. I'm surprised anyone would take offence at such an obvious statement. Don't know much about Jeffrey but he was very quick to let rip. Perhaps he's not too familiar with London?

Biffo knows all about London.Or thinks he does.What he doesn't know is about pubs and beer.Or life really.But be careful Penny,lest you be cast down into Hades and banned from his so called blog.