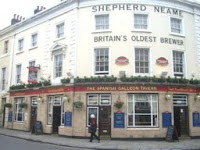 On Sunday our little group had a jaunt down the river to Greenwich, going down there on a boat and back on the DLR. We met at Tower Pier, so that gave me an opportunity for a swifty. O'Hanlon's Yellowhammer was surprisingly tasty, though for me it needed a bit - OK - a lot more bitterness.

In bright sunshine we hopped off our boat, passed what is left of the Cutty Sark (built in my home town) and the party immediately split up, with most of the men heading straight to the nearest pub to watch the Manchester derby. We chose the Spanish Galleon, a Shepherd Neame pub, on the simple basis that it was showing the match. Most of us drank Master Brew which was rather good and a surprise to me. Not outstanding in any way, but decently drinkable. Some of our party switched to Spitfire which was only considered "OK". The pub was well run and packed, with an equal bias for each side. A good couple of hours, except for the result, though our two Man U fans wouldn't agree.

After some sightseeing we met up again in the Greenwich Union, where most enjoyed the Meantime London Pale Ale. I personally thought it kind of died in the glass and switched to the Wheat Beer which was served with no head, in an incredibly chunky and heavy glass. This very good beer deserved much better presentation, as did the pale ale in fact. Some of us ate and the food was pronounced as excellent, so a good visit all round.

Yesterday saw our visit to the Houses of Parliament which was fascinating and concluded with drinks on the terrace of the Strangers Bar. No cask ale while Parliament is in recess, but Guinness did the trick. It really is one of the best places to drink beer in London with spectacular views over the Thames, though sadly I won't be making a habit of it. Later we walked to Zeitgeist in Lambeth, where German beer was thoroughly enjoyed at happy hour prices of £3 a pint.

Not as cheap as the subsidised Guinness (£2.20), but you can't have everything.
Posted by Tandleman at 09:00

Labels: London
Email ThisBlogThis!Share to TwitterShare to FacebookShare to Pinterest

I remember that on one of many lobbies of Parliament, I was bought a pint or two in the Strangers Bar by the late Eric Heffer, MP. I can't recall what beer it was, but on another occasion, my own MP just bought me a cup of tea! The views across the Thames from the terrace are, as you say, spectacular.