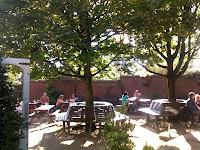 My cultural day on Saturday did eventually turn into a bit of a booze up, but not before admiring the various attractions of Rochdale Parish Church, with its defaced (literally) figures, vandalised by scandalised Cromwellians as "false idols" during the English Civil War and of course the extract from the parish register of the birth of one Gracie Fields.

The Pioneers Museum was a touching and humbling tribute to the far sightedness of the founders of the Co-op movement who were appalled by the way the poor were cheated by suppliers of adulterated and short measure food and were determined to do something about it. The displays were interesting and the young curator informative. I made a mental note to do more of my shopping in the Co-op from now on, remembering as a child, going to buy things for my Mum and always of course, quoting our "divvy" number. Anyone of my generation will remember theirs as I do ours I'll bet.

But man does not live by culture (or indeed nostalgia) alone, so we slipped next door into the Baum, the only other building still standing on Toad Lane. There are now six handpumps, but my eye was immediately caught by Phoenix Arizona, particularly as Simon the owner mentioned it was a new cask. This pale, straw coloured beer was clear as a bell and was cask ale on top form. We all savoured its divine bitter hoppiness and full malt base. So much so that we stuck with it for the next couple of hours, before a quick visit to the Regal Moon where a number of top form hoppy Elland Brewery beers sent us home rejoicing.

There are those who are calling for pale "summer" beers to be replaced as autumn approaches with mellower, fruitier beers. Replace Phoenix and Elland? Ignore such siren calls. Beers like these are always in demand.

The photo is the beer garden in the Baum. Not bad eh?
Posted by Tandleman at 07:42

The beer garden's not at all bad, no, but the photo...shrink it!

Not sure which I regret more from our Lancastrian/Mancurian/Cumbrian trip last month: that Lees Bitter was so bizarrely lame, or that I failed to find any Phoenix.

Browsing Elland's (slightly broken) webbie makes me think they'd be right up my alley. I'd hope to run into them a few times if we make a trip to, say, Yorkshire sometime.

Nice photo. I agree, why shrink it, it's a good size. Unless your web browser is showing it full size?

It's too big! Not the thumbnail one that's displayed with the article, but the original that comes up when you click on it. It doesn't need to be larger than 800 or 1024, especially since it ain't completely in focus. But that's just me.

Have to say the photo looks all right to me-not bad quality at all.

Too big? Talk about fucking pedantic.