A Fool to Myself 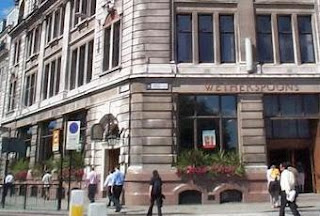 Now I am more open minded than most when it comes to JD Wetherspoon, though well aware of their limitations and faults. I kind of regard them as a distress purchase - good in certain situations. A bit like Guinness, not something you'd actively choose, but if there is nothing better, it'll do.

Last night we decided to nip along to the Liberty Bounds for their curry night as one of the few times I have had a curry there, I've quite enjoyed it, but there is a big caveat. I've always had their "thali" - a load of little sampler dishes of various curries - and though I am well aware it is microwaved, nonetheless, not too bad. First problem; they have stopped doing the thali. I also looked at the beers on the bar - an unremitting sea of brown. This is where I really got it wrong. We should have left at that point. After all the reason for going there in the first place was gone. But, fool that I am, we didn't.

I ordered the chicken jalfrezi. Poor beyond belief. It was a three or four chilli dish. Bollocks. I've had hotter cough sweets. The free drink should have been Pedigree, but luckily there was none. I chose Exe Valley XXV, mentioned here by Paul Garrard, who found it "a complex beer that keeps you guessing". No Paul, this tasted like fermented farmyard sweepings and was by a long way the worst beer I've had this year. Undrinkable rubbish. Feeling distinctly crabby by now, I took it back where it was exchanged for the second worst beer I've had this year, Goff's Tournament. Who let that out of the brewery? Determined to salvage something from the night, I orderd a Weston's Organic Cider. It had gone off. "Would I like Thatcher's Old Rosie?" "That'll be fine." No. That was off too.

We left with me in a bad temper, having had in spades the sort of experience that others frequently complain about. The only thing missing was the chavs. There isn't going to be much let up either. I picked up the JDW magazine which lists the forthcoming guest list. Brown, brown, brown, brown and fecking brown. They even boast about their darker autumnal range. What on earth is the matter with these people? Recommended by East-West Ales it seems. What's the matter with these people?

I know. It serves me right, but if Timbo had been there, he would have got a piece of my mind.

There are three really good beers on the list: Oakham Mompesson's Gold, Thornbridge Jaipur and best of all, the delicious St Austell Proper Job. The rest are a mixed bag of hopless wonders.

E's chicken tikka massalla - I know- was considered OK.
Posted by Tandleman at 08:18

Funnily enough, despite not particlarlt liking the plance, our local JDW seems to keep it's beer well.

Yikes! I don't mind the microwaved Jalfrezi actually. Pretty unlucky not find one beer you liked out of the range. The 3 you singled out from the forthcoming lineup are all excellent - there's no excuse for ditching the light beers just because of the change of seasons though. Don't forget there's another International Ale Festival coming up too.

I must have been lucky with Jaipur being on for my chance visit to the JDW in Sale last week. Very well kept, too, but this isn't always the case.

Ah, the old classic-the warning signs are there but soemtimes we ignore them and that makes it seemly doubly worse when our expectations are met.

I've had to abandon JDW curries ever since they replaced the veggie option for an inferior one. As for the Liberty, it's only plus point is location-I've yet to find one decent beer on in the place.

I have tended to avoid the Wetherspoons and Lloyds No 1 pubs in Southport as they were so mediocre. However, a new manager at our Wetherspoons has improved the beer range and quality damatically. All the beers are either on or with a "coming soon" sticker ~ none of the irritating scam of leaving the pump clips facing outwards even if the beer's not on. Our Lloyds remains mediocre.

I think it's unfair to tar all Wetherspoons with the same brush as some drinkers do ~ we wouldn't do it for any other pub company ~ and their guest ale policies are far superior to most PubCos, whether or not you like their choices. Besides, some people like brown beer.

Seems like not everyone agrees with your assesment of Exe Valley XXV...They seem rather proud of it.....'Do look out for XXV on a bar near you'

As mine was also in a JDW I was prepared to give Exe Valley the benefit of the doubt. Seems when I slag a beer off it's suggested that it was the pub and not the brewery, and when I assume it's the pub that's wrong as well. Can't win! Never mind it's good to have a second opinion that equates with mine. For the record I did find it a bit of a challenge.

On another not what are you (or anyone else) doing eating chicken?
Mass produced chicken is one of the fattiest meats around and just sooooo tasteless.

RedNev. It is unfair to tarnish the Spoons in the manner you suggest, but that is the cost of branding a managed chain thus. Other PubCo's make it less clear who owns the gaff and whether its managed or tenanted. If you brand a chain you have to maintain quality throughout or risk one dump affecting the whole brand. My experience of the Spoons is quite positive. I like the approach of reasonable prices and not stinging punters, and my visits have always been to clean well run gaffs.

The Spoons have nice toilets. One of the few pubs I feel comfortable having a dump in. Speaks well of the hygiene standards. Never drink or eat in a place with dirty toilets. My Gran taught me that.

Some people like self-flagellation but I wouldn't recommend that either...

I think I once had a pint of self-flagellation. Dark murky pongy flat bog water if I remember correctly. The ice cold fizzy Carlsberg I had afterward was like a drop of angel tears in comparison.

As 'spoons go, the Crosse Keys about 10 minutes walk from the Liberty Bounds is a pretty safe bet. It's a bit 'Albert Speer' inside though.

I wouldn't eat in a place that microwaves their food! WTF is that all about?? I'd ban 'em just for that, forget about the beer.

Sadly, McSpoons (I call them this for a very obvious reason!) are a great proponent of "lowest common denominator" products such as microwaved food, hop-less brown beer, cheap beer for tramps and lurid spirits.

As you say, a distress visit only.

Whorst - You wouldn't eat much in the UK if it wasn't for the good old microwave. That isn't the problem. It is WHAT you microwave that is.

Gazza. Yiu are right, buty in London, it isn't even that cheap any more.

When on the island, I eat sandwiches, seabrook crisps, kebabs curries, Cadbury(fruit & nut of course!), and the odd veggie whopper as a snack. Sometimes I just hit the store and buy a chunk of cheese and some crusty bread. I've also be known to power drive ale at an alarming rate.

JDW do seem to have gone downhill recently, and markedly so. Has Mr Martin taken his eye off the ball?

Bit surprised about East-West Ales; I know their MD personally, and his taste in ales is normally impeccable.

Tyson:
"Some people like self-flagellation but I wouldn't recommend that either..."

Presumably this hostility to brown beers is a phobia from the Bury area, as I only see it emanating from TM & Tyson. Or is "brown beer" some kind of Mancunian code for something else? Perhaps Dan Brown should look into this mystery.

No great mystery. Brown beer is synonymous with malty, hop free beer to my mind and I like hops in my beer. Loads of them.

I know not all brown beers are a hop free zone but it is usually a warning light.

If you eat in a Wetherspoons, you don't really like food.

A bit of a sweeping generalisation, but on this evidence, can't really disagree. As I said. A fool to myself.

Nev
Light/dark beer-often interesting use of hops or malt and other flavours. Brown beer-(often) insipid and seemingly the lazy option for many brewers-hence the number of micros churning them out.

It's not a regional thing. Check out Paul's thoughts on them at
http://baileysbeerblog.blogspot.com/2009/09/too-much-brown-beer.html
and he's from Kent!

I know. It serves me right, but if Timbo had been there, he would have got a piece of my mind.
I'll take that as a compliment!

Ah fair enough - do you drink with Tim Martin often?