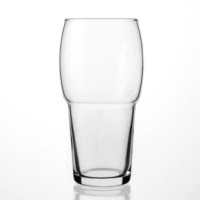 The Government is set to change the law and allow two thirds of an imperial pint to become a legal measure in the UK. The industry believes it will offer greater flexibility for serving draught beer and cider, especially those with a higher alcohol content. “There is no question of replacing the British pint, but introducing the option of a new imperial measure is good news for consumers, providing them with more choice," said Science and Innovation Minister Lord Drayson.

I suppose there is a logic to this as thirds are a legal measure, but I suspect this is not so much a widening of choice, but a part of the continual demonising of alcohol by pushing smaller measures overall. I don't know of anyone who has campaigned for this and I've never heard it as a topic of conversation among drinkers, or indeed the trade. Will it make a difference? Well being of the persuasion that suspects the worst, it may be that some unscrupulous sellers of beer will use this as an excuse to either sell two thirds for the current price of a pint, or will sell two thirds not at pro rata, but at a premium. I can imagine that glass manufacturers will be trying to design a glass that looks as much like a pint glass as possible. I rather doubt if it will be done by using lined glasses with the two thirds being an option. The on trade has always resisted such glasses and as the push apparently comes from the trade, who have never bothered with using thirds, you have to suspect motives, especially when the Government goes along with it.

What do you think?

It isn't known when this will happen, as it needs a change to primary legislation.
Posted by Tandleman at 08:16

Labels: Glasses, Sinister Goings On
Email ThisBlogThis!Share to TwitterShare to FacebookShare to Pinterest

Having read it, it's interesting to note that there were only 127 responses. Of those, only 47 were individuals, so the public are hardly clamouring for change. As you say, very much trade driven-which makes me sceptical and I think Camra made some good points in opposing it.

Well you asked what I think and I think it is for puffs.

Surely the proof of the pudding is in the eating. Very few new products will be actively demanded by members of the public before they have been introduced, but that doesn't mean there will be no demand for them once brought in. The level of response from individual members of the public to government consultations of any kind tends to be very low anyway, so the fact there were only 47 responses doesn't really signify anything.

Mudgie: A bit fence sitty for you surely? If you look at those in favour, Alcohol Concern are quoted. Thought you'd be down on this one like a ton of bricks.

I think it's a terrific idea, especially with some of my favourite beers (new and old) coming in over 5%. Perfect. Lovely stuff. Agreed and approved.

As regards this: 'I don't know of anyone who has campaigned for this and I've never heard it as a topic of conversation among drinkers, or indeed the trade.'

...I humbly point your (far larger volume of) readers/drinkers here:

or me here way back in October last year so there:

But with respect while we are ordinary drinkers in some ways, in other ways, we aren't. Joe Public isn't demanding it.

Tandleman: I'm in favour of it, as I have said on my blog. The fact that Alcohol Concern support something doesn't automatically mean that it is a bad idea, although obviously it does raise a question mark. If pubs are allowed to serve nips, then surely it is nonsensical to ban them from serving a "double nip".

Realistically, I don't think it will take off as drinkers are too set in their ways. But if it did, then I think it's something I would use. A half-pint still seems something like a distress purchase, but I don't think a schooner would.

In modern parlance, terms like poof, gay and what not mean "naff". Just like old people complain gay used to mean "happy", I'm sure we will see homesexuals moaning that gay no means shirt lifter and now means "naff".

Drinking anything other than a pint is poofy, whether its a half or twother. Thats not to say such people actually do engage in man love, though it wouldn't surprise me.

Only women and children drink anything less than a litre at a time.

"The fact that Alcohol Concern support something doesn't automatically mean that it is a bad idea".

True...But I've yet to hear a good one from them.

London pubs will leave it approximatley 2.63 days before charging what they did for a pint, of that there is no doubt, so in my view they can fu*ck right off.Although on the plus side if they design the glass to look like a pint , then the Tickers might not look so nobbish.

I doubt there'd be much demand for it, partly because of the attitudes that Cooking Lager has described, but also because the problem for pubs with storing all the extra 2/3 pint glasses. In addition, a short measure may mean you'd end up with little over half a pint anyway.

If the government was genuinely concerned about consumer choice, they'd cut beer duty as I believe most pub goers would, if given the chance, choose not to subsidise bankers with every mouthful.

Coxy - I think you are being unfair to London pubs here. I see no reason why they'd be any worse than others. I'd guess though it'll be night clubs, outside events with a beer bar, shows plus theatres, concert venues etc that'll do the gouging.

Well I think it's got it's place. I agree with JJ, although I'd better just nip off to his blog to check out what he's saying in full - see you later.....

As always Dave, it's how it will be applied that will determine how it is perceived. If there is a separate brim measure two thirds glass, proportionately priced and widely available, it might well be a success.

If it is used as a way to skin people, it won't be. We'll just have to wait and see.

Lets all hope Avery doesn't have any say in the new design.

If you reduce the ammount of product sold in a standard unit, it is easier to implement higher price increases. If you look at the change when petrol went from gallons to litres , the govenments put similar tax increases on Litres to they had on gallons,they would never have got away with putting 20p a Gallon but did with 5p a litre.

I think it's a good idea in theory. The trouble is, a third is a legal measure but I only know one pub that offers them - The Rake. The only other time I see them is at beer festivals. Would having this as a legal measure actually mean any difference in the actual pub environment? I doubt it, yet I like the idea, especially on stronger beers, or for someone who is driving and can't bear not having a beer.

I like it, to be honest. Think of beer Festivals, where I personally drink from half-pint glasses in order to sample a larger range of beer. If I want to taste lots of beers, this new glass helps that, if I dont, then I can get a pint. To me, it's not really a big deal - and certainly does not threaten the 'pint'.

Hi Tandleman,
It has been really interesting to see the mixed reactions to the new 2/3 pint. I work for an initiative called BitterSweet Partnership, which has been set up by MolsonCoors Brewers to address some of the myths and stereotypes surrounding beer, and we are quite excited about this announcement as we think it will be significant news for women. Through our research we have found that the beer serve itself is often key to women’s perceptions of it. In fact it is so significant that a quarter of women in the UK would consider beer if the glassware was changed. But it’s not just the size of pints that puts women off, it’s the whole design. As well as new measures we’d like to see manufacturers starting to take cue from the Continent, where different shaped glasses are used to serve beer – interestingly, while many women don’t like to drink beer in the UK, a fifth do opt for beer on holiday. We are very interested to see if this new 2/3 pint will open the door for this kind of change, and hopefully we will see more women enjoying beer. You can check out our website here: http://www.bittersweetpartnership.com. We’d be interested to know what you think!

It's wonderful to see Molson/Coors caring about stemware, as both products are deserving of being poured down the toilet. Perhaps disguising it in a posh glass would change it's image.