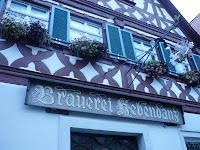 Our trip to four brewery Forchheim was uneventful despite the rail replacement bus that took us there. As the S Bahn line was being extended, no trains were running, but the efficient buses were fine, though DB seemed to have decided to oversee the operation with their dumbest employees, particularly at the Forchheim end.

Forchheim is a quite lovely town, with ancient buildings everywhere and a poignant Jewish memorial reminding us of darker times. A little river runs through it and we enjoyed the stroll round until, by happenstance, we arrived at Sattlertorstrasse where it seems there are two brewpubs. Actually, I'd been looking forward to this. We've been selling Neder beers at the GBBF for years and here was a chance to try them in situ. Next door was Brauerei Hebendanz which Ronbo mentions fondly and accurately here. 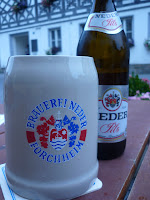 ted at Hebendanz, though noting it is now a smoking pub, E sat outside on the self service tables, while I braved the smoky interior. My first impression was that everyone had at least two cigarettes going at once, some maybe three. There is a corridor and one room and as Ron remarks, it is simply full of oddballs. I looked though the gloom, seeking out Ron's waxy faced pal, but he didn't seem to be there. No worry, there was plenty Adams Family escapees to be going on with. The kellerbier was tasty and cheap. I had two before we nipped along to Neder where no smoking is allowed and contrastingly, everything seemed normal. The kellerbier was fine, but not as good as that of Hebendanz. E didn't like it, so asked me to fetch her a bottle of pils. This is well within my German capabilities. A bottle was duly produced and I was then asked a perplexing question. It perplexed me, as I didn't understand a word of it. My blank look brought a reply in German. "Would I like a glass?" Now this part of Franconia has some impenetrable dialects - just try reading some of the handwritten notices - but this was it in action. 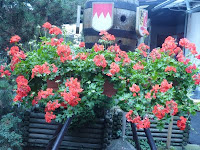 tablished that Greifbrau's pub along the street was closed for good and that Eichhorn was on a ruhetag (rest day) we walked up to the Josef Greif Brauerei where Ron mentions you can get a beer. You can. In an odd little garden, sandwiched beween the keg and bottling plants, there is a few tables and a hatch dispensing pils and kellerbier. Both were excellent and we watched the various beery goings on at the brewery happily enough, before a meal and some more beer in town.

Forchheim really is a great little town and recommended very highly, just watch out for the denizens of Hebendanz.

On our return to Bamberg I settled the conflicting information from the two DBahn eejits posted there about which of two buses left first, by simply asking in German "Is this first? Yes or no?" That sorted it!
Posted by Tandleman at 14:57

I just re-read your piece. Not surprising. I just found it odd.

In 2003 I had a good lunch in Hebendanz and there were no nutters! Last year my brother and I were pestered by a drunk who visited each local at his table in turn and then settled in with us. It really wasn't anything different from what you find in some town pubs in the UK, and it was worth the aggravation for the beer, in my view.

In a blind tasting a couple of years ago, customers at Amsterdam's Wildeman voted Neder the best Kellerbier, and there is a certificate to that effect on the wall in Neder. I agree with you that the combination and the proximity of the breweries, together with the architecture and the river, make Forchheim an excellent place to visit.

Nice to see a stoneware Krug. Forschungsbrauerei serve their beer in these vessels, as to Augustiner in Salzburg. They definitely help the beer remain cooler for longer, although out of curiosity when sampling a new brew, I do like to see what colour it is.

Will pencil in Forchheim as a place to visit when we finally make it to Bamberg.