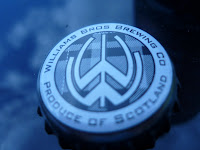 For those of us that grew up in Scotland, the name Alloa is synonymous with brewing. Youngers, Maclays and of course the biggest of them all when I was a lad, Ind Coope, brewing in the former Arrol's Brewery, famous or infamous for Skol Lager and whose Diamond Heavy was an erstwhile favourite of mine. Now of course it is all gone and only one brewery remains, or rather, has emerged; William Brothers known hitherto mainly for its Fraoch Heather Ale.

They kindly sent me some of their beers to sample and finally I got round to trying two. First up after mowing my grass - I wouldn't call it a lawn - was their lager, Ceilidh (4.7%) which seemed a reasonable place to start. Dull gold in colour with a lasting white head this beer had a Southern German Helles nose, but there the similarity ended. Lemony/lime citrus and spiciness are the dominant flavours, though I didn't get the sesame referred to by the Bitten Bullet. Lemon is foremost through to a dry, citrus finish with just a touch of grassiness and a slight aromatic hint of hops. The malt base underpinning all this could be firmer, but this is a decent enough beer, though not one I'd rush to buy. Not all the Tandleman household agreed. E tried it and summed it up pithily as "horrible." A bit harsh I'd say. 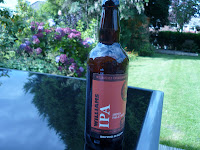 ent kettle of fish is the same brewery's five percent IPA. They set out to achieve a beer for the novice and hophead alike, which is a tricky one. Well I liked it. Big, booming alpha hops give it a grapefruit nose and a resiny, quenching flavour throughout to a dry, bitter, lasting, resinous, hoppy finish. I couldn't detect the tell tale blackberry (or should I say bramble?) flavours from the Bramling Cross hops and I'm glad of that. Instead Amarillo dominated, which is just fine by this writer. The grain bill is lager malt with some wheat and that worked well too. This was a beer of some poise and I'd certainly buy it again. Oddly it refreshed far better than the lager.

Lawnmower beer? I should say so.

E loved this one too.
Posted by Tandleman at 08:32

And you drank the Ceilidh after cutting the grass, while I reckoned it wasn't one for that kind of post-mowing chugging! :D

I found the Ceilidh interesting and satisfying and the IPA really lovely and well balanced, probably my favourite of the four (close run with the 80/-).

Thanks for the linkage :)

Hi Barry. I was starting to feel bad about not drinking them. I agree the IPA was delish.

It may have very well been delish, but was it as good as mine?? I have serious doubts.

Yo, Herr 'man, got something you might find interesting. Found a review on beeradvocate for Sam Smith's OBB. I don't care for it, but the review mentions Museum. What's even more ironic is I know the guy. He lives out here now, but originally resides from Yorkshire somewhere. He was apparently quite fond of it, as I was.

Samuel Smith’s Old Brewery Bitter (OBB) divides opinions in the UK, even amongst CAMRA members and experienced beer drinkers. What needs to be understood is that it is predominantly a Malt based beer, and not really like your “run-of-the-mill” English session Bitters.
Also, it is from Yorkshire’s oldest Brewery, it is brewed from the Breweries own well water, has NO adjuncts, does not benefit from any Brewery aids whatsoever, utilises the Yorkshire Squares (made from Slate) system of fermentation, and when distributed to nearly all of its Pubs in Cask Conditioned format, it is supplied in Wooden Casks, YES Wooden!!- NOT Steel, or Aluminum, but- Wood. One of only a handful of UK Brewers left that still employ a Cooper.
Sadly, after the demise of Tadcaster Bitter and Museum Ale :-((, this is now the only Cask-Conditioned beer that Sam’s make. Such a Tragic Shame.
So with the above in mind, you will never find a Handpulled Sam’s OBB with a ‘decent’ head, whilst Wooden Casks will keep the beer in good condition, high carbonation levels are rarely experienced in this format. In the North of England where Swan-Necks, or Sparklers, are used for dispense you may get something resembling a head. As such, the head tends to dissipate quickly to a thin covering. Has a light brown, typical “English Bitter” color, that has a higher than average strength at 4% ABV. Malt is prevalent in the initial tastes, and to a certain extent dominates the beer. However, when “on form”, it has a fruitiness to die for, with a superb hoppy finish that really makes this beer. It often has a long lingering bitter, fruity finish. Mouthfeel is average, which again is perfectly acceptable for this beer – bear in mind people in the UK will often drink a Gallon of this beer in one night. It is a true Session Beer.

Ironic I know, but don’t expect it to be Bitter!. This is a very misunderstood beer, rarely appreciated – but I dearly love it, and in the North of England, in Sam’s Houses you will be hard pressed to beat it for value. Also, Sam’s Pubs themselves take some beating.
Last Tasted at the Historic Samuel Smiths Inn, the White Horse, or “Nellies”, in Beverley, North Yorkshire.
www.nellies.co.uk
Go on - have a look, and see what you are missing.

NOTE: This is the only Cask Conditioned Beer that Samuel Smiths now brew, sadly.
If only you could have tasted their Museum Ale on Cask – oh, it was Wonderous!!

What a lovely ode to Sam Smith's OBB. Shame it's such a boring beer. Anyway Tandleman, the Angel on Rochdale Road is no more. However, at least they cleaned the place up a bit, so do you think someone might take it on?

Yes thanks for that Sausage. Not a lot to add really except that it tends to hold its head a bit better nowadays, but us still a malty beer.

Haven't had time to try mine yet. Oh so little time, oh so much beer!

Trouble is nostalgia ain’t what it used to be. Things have moved on quite a bit for Sam Smiths in 7 years. (1) Not all the casks are wooden. (2) Less of their pubs sell real ale. (3) Quite a number of their pubs have been forced to have detrimental makeovers. So, yes, they’re eccentric landlords but let’s not over-romanticise them.

And yes, OBB does seem to keep more of a head these days. IMO Museum was better than OBB but whether it was that good is difficult to say without seeing it through rose tinted specs.

On the Sam Smiths subject, I would agree that (at least to my palate) OBB is a pretty bog-standard session bitter, and certainly not something I'd be in any kind of a rush to rave about.

We used to sell it here in Leicester, until the brewery decided (for no adequately explained reason) to drop the city from their delivery route.

Over rated and not over here.

One local chain of cafe-bars up here in Glasgow used to sell Sam Smith's draught stout and lager until fairly recently. I understand it was also stopped because the brewery didn't sell enough beer in Scotland for it to be worth delivering.

I am so glad to read your wonderful article. Im looking forward to read more of
your works and posts. You did a good job! Try to visit my site too and enjoy.