Am I a Cider Drinker? 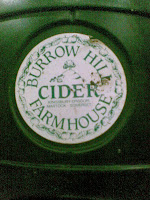 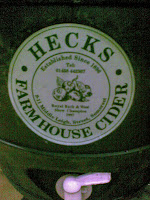 Well no I'm not, but we had an impromptu tasting session just before leaving Oldham Beer Festival set-up yesterday. I rather enjoyed the two whose photos are featured here, as they were fresh tasting and very appley, which oddly, some ciders aren't.

I hated the two perries I tasted, but as that's probably just me, I won't name them.

I'll share a tip with you from many years of looking after beer. It is very rare you get a bad beer from a vigorous secondary fermentation. It is very rare that you get a great one where there isn't. Simples!
Posted by Tandleman at 07:32

I thoroughly concur with your tip.

The Hecks is local enough to me (Street) for it to turn up sometimes on draught in Bath's The Royal Oak (the brilliant one in Twerton not the deeply average one near the centre) but for some reason it never hangs around. Can't imagine why.

The only time I've experienced bad beer from a volcanic secondary is when the foam comes from a yeast infection, although these days this is a rare thing! So in the main you're spot on.

(I used to be a cellarman for Boddies and have cellared more beer fests than I can remember years back...)

No coider for me last night. We sold the lot. Emergency supplies arriving today.