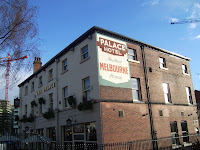 I was in Leeds yesterday and had an hour or two to myself. I was being picked up at the Parish Church, so the choice of venue was simple, my old haunt when I worked in Leeds, the Palace. It was lunchtime, the pub was heaving. It sells around ten beers on handpump and inexpensive, cheap and cheerful food, a good selection of wines by the glass or bottle at prices that don't make you weep and a reasonable choice of lagers including Staropramen. It is bright and welcoming, with large windows and is a nice place to be in.

I enjoyed my beers and lapped up the pleasant atmosphere for an hour before nipping across to the magnificent Leeds Market which used to be my lunch break diversion from work. I had though, one other pub in mind. The Duck and Drake was one of the main multi choice pubs when this was less common. I used to drink there often and can remember some fine pints there. Always a bit rougher and readier than the Palace, it nonetheless was a fine place to enjoy good cask ale in a genuine old fashioned atmosphere. I had half an hour left, so nipped in. Two hefty smokers blocked my way, moving reluctantly aside. Inside there was no-one behind the bar and a solitary customer reading a Daily Mirror. It looked forlorn, down at heel and had obviously seen much better days. I hesitated then fled. Back in the Palace I reflected that no wonder it isn't in the Good Beer Guide. I checked when I got home. It has not been in since 2007. Seems the out of touch CAMRA has got this one right.

As far as I know, the Duck and Drake is operated by Scottish and Newcastle Pub Enterprises. The Palace has now been placed in the ever expanding Nicolson's chain.
Posted by Tandleman at 11:55

That's a shame. It's a fine line between down-to-Earth and downright grotty. Sounds like this pub's gone over to the dark side.

Been visiting Leeds for near 20 years and totally agree - D&D is now a shabby, seedy-looking pub which once was simply a bit down-at-heel. After my last visit I probably won't bother again - poor beer range and the half I had was warm and on it's way out. Sad when I think back to what it used to be like... although, on the upside, Leeds has never had as many good pubs as it does now.

Leeds used to have a good number of basic Tetley houses in the Beer Guide, where the local bitter justified the vigorous defence of the worthy local CAMRA branch. There now seem to be very few such options for good Tetley; the Beer Guide entries are now multi-ale palaces (no pun intended).

The other thing I notice when regularkly visiting West Yorkshire is the near-inevitability of Copper Dragon in the Beer Guide pubs - no complaints when Pippin is as good as it is !

I was in the D&D a couple of Saturdays ago - dead as a doornail. The beer I had was good though - something American hopped from Titanic.

Strangely enough, I was in Leeds doing the same pubs. I totally agree about the D & D. Shabby pub, no customers, disinterested bar staff, and the smokers blocking the doorway. Will not be rushing back.

yep, have to agree, sadly. The D&D is no longer a place i'd really go out of my way to drink in - and certainly not for more than one. A shame - the beer is usally on form. It's just such a depressing place to enjoy it.