Putting Your Own House in Order 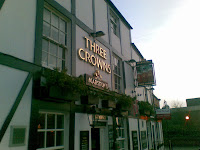 When I left the hall yesterday after Oldham Beer Festival set-up, I saw the back of my bus leaving. Damn. It was a half hour wait for the next one, so what to do? Conveniently there is a pub opposite the bus station. It is signed and run by Marstons. Do you remember that rant by Marston's MD Stephen Oliver that I referred to recently? I know he has apologised for most of it since, but remembering his boast that I could have all the choice of beer I'd like in his pubs, I went in.

Guess what? Of the 35 permanent beers boasted by Mr Oliver, exactly none were available. The pump clips were all turned round. Instead a lone Black Sheep pump coughed and spluttered a reluctant half of ice cold beer to me. The barman, with cigarette behind his ear, told me I might need it topping up as it had been giving trouble all day. He then retreated to the open back door to smoke said fag. It did need topping up, but I didn't bother asking for one, or wondering why he didn't change the beer onto a non faulty handpump. He had plenty to choose from and almost no customers.

There are many reasons why we don't go to pubs, but I'd imagine this cheerless experience would put you off for quite a while. I went back to the cold bus station. It was preferable by far and a much happier place. At least in a bus station hope and expectation fill the air. The pub is for sale or is it lease? No wonder.

Reading this Ollie?
Posted by Tandleman at 08:53

I find it increasingly difficult to get staff to understand your very simple and important point.

I think a lot of the problem is that the (typically) young people employed to do bar work do not, themselves, visit pubs. A lot of young people visit barn-like JDWs, All Bar Ones; they go clubbing; they drink at home watching YouTube videos of people falling off skateboards...

...all of which makes me sound like an old fart. But go into a really good pub and you will not (again, typically) find groups of early-twentysomethings - and where you do they're ususally middle class or educated types.

It's why waiting is so bad in the UK. The average French person will visit countless independent bistros and restaurants with their parents - regardless of background. When older and taking on a waiting role, they'll have some understanding of what is required. Here, simple stuff goes horribly wrong, like coffees arriving before dessert. All because the servers have *no idea* when things should arrive.

Despite our 'service-led economy', the UK's levels of service are usually dreadful.

Yes, coffee before dessert is a classic. I've commented before on the lamentable standards of service prevailing in restaurants in this country.

Service in this country is too often shite. I often rant against much US culture, but service is something, in the main, that we could learn to do well from our American cousins

I am currently working as a temporary contractor at Oldham Council, and this pub is actually right opposite where I work. I have never been in it, although from the outside it does look quite attractive. From Tandleman's description, the local Wetherspoon's must be a much better bet.

You want the Ashton Arms in Clegg St

I must be clear here. I wasn't having a go at the poor unfortunate that was behind the bar. He as has been remarked, probably knows no better. It was the cheerless, souless pub I was complaining about.

As a recovering Yank, I find typical Yank service to be tiresomely overdone. I don't need to know my server by name, nor do I need to be asked 3 times how everything's goin' during my meal. Striving for the 15+% tip!

It must have improved since then, given that it's in the 2012 Good Beer Guide :-)