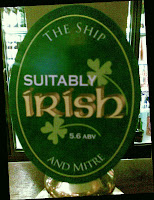 I had to call into JDW's Regal Moon in Rochdale to drop off some CAMRA stuff, so had a half. My beer of choice was that rarest of beasts, a cask conditioned stout, which jostled with Irish and British beers trying to blag some kind of St Patrick's affiliation.

Now Chris the manager hadn't heard of the brewery and asked me if I had. Well no, I hadn't. The beer in question was Ship and Mitre Suitably Irish, a rather full bodied little number at 5.6% which was pretty good, though it needed a stronger hop finish to disguise the alcohol. I know the Ship and Mitre Free House in Liverpool of course, but they don't brew and I can find nothing helpful on t'interweb.

My guess it that is brewed for the Scousers. Anyone know anything?

Chris will check the cask when he gets a chance, to see if it yields any clues.

Twas the house beer of the Ship & Mitre. Brewed by 3 Rivers, I believe.

If the manager had cared at all, he could have checked the cask in about twenty seconds. So in other words, he was humouring you. Stop boring pub staff and get a life.

PT - I was there at Chris's request. He is a mate of mine and HE asked me, not the other way round.

I don't doubt your mates - if you have any - humour you. They probably need to.

Thanks for dropping by.