Still Not for Me 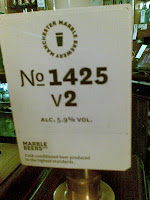 A brief visit to the Marble Arch last night saw rather an eclectic range of beers on the bar. Leading the charge was the second edition of Marble 1425, a 5.9% heavily hopped beer, broadly in the American IPA style. A quick conversation with she who must be obeyed resulted in a change of designated driver. I wanted to try this. I started though with Derwent State Bitter, a recreation of an old brew for the Carlisle State Brewery - yes - it was owned by UK plc and survived until the seventies. It wasn't bad, being like most bitters of that era, brown and inoffensive, which these days doesn't really hit the mark. Much better was Green Mill of Rochdale's Nostalgia Porter which was dry, dark, liquorice edged, with a coal dust finish. Really rather good. I have been impressed by their dark beers, but you can hide a multitude of faults in a dark beer that would be exposed in a paler one, so the jury is still out for me.

While my lass stuck to Pictish Brewer's Gold - no fool she - when she sees Pictish on the bar, she is like a moth to a flame, I plumped for the 1425. I had found the first version of this rather harsh and hard to drink. Would the second version be better balanced? Well yes and no. It seemed to me the beer had been softened by a whopping increase in crystal malt, its tell tale barley sugar taste mixing with the alcohol to create a much sweeter drink. It still had a huge, resiny Yankee hop presence, but somehow the beer just didn't do it for me. It had swung too far the other way. That's just how it goes sometimes, but as always, experimentation is good. It creates interest and awareness and I have no doubt that others may feel differently to me.

As I was only allowed one more drink, I chose (a pint this time) of JP Best, reluctantly passing over Ginger 6, a souped up version of Marble Ginger Beer. This pale brown beauty rarely disappoints and was in great form, with just the right balance of juicy malt and a whack of resinous American hops to see it through to a very satisfying finish.

An interesting hour out and thanks to my girl for driving. My turn next.

The Marble has started giving out till receipts. Very handy for remembering what you had as each beer is detailed. Must be a bugger to keep reprogramming though.
Posted by Tandleman at 09:48

Phwoar, I don't half fancy a souped-up Ginger Marble.

I might be able to make it to Manchester around June-ish. I should ask them to put a pint aside for me now.

Don't forget to let me know and we can have a pint or two. There must be some decent keg somewhere. (-;

Sure thing. You've plenty of time to sample each and every keg beer in the Greater Manchester area so that when I come over we can stick to the good ones.
*falls off chair laughing*

I'll shout you a pint of Boddington's Tandleman!