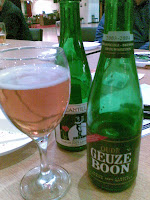 There was only about ten or so people left at the end of Oldham Beer Festival to enjoy a quiet hour or two after a very successful festival. As we sat shattered and knackered, we had a couple of beers, but I was all casked out. My poor tired body and jaded palate needed something different. There was a little cider left, but no, that wouldn't do it. What would then? I eyed the Foreign Beer Bar up. I knew what I wanted. Gueze! So what did we have in stock? Gueze Boon, a favourite of mine and three from Cantillon, the straight 100% lambic, the Kriek Gueze with the addition of sour cherries and Rose de Gambrinus, the raspberry one.

Now these beers are not to everyone's taste and when passed round, produced many a grimace, but to me and my partner in crime, John Lewis, well known cider guru and a predecessor of mine as Branch Chairman, love the stuff. We started on the Boon, Dry, tart, but q 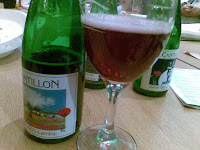 uite refined and relatively easy drinking, with a refreshing sour kick. The Cantillon Gueze was drier, sourer, more in your face and delicious. The Kriek had a distinct sour cherry taste, rather like the pink penicillin medicine some of us old geezers used get forced down our swollen necks, forty plus years ago, when we got ill. Its finish was pure lambic with that lipsmacking cherry kick. The Gambrinus was new to me. Unsweetened and delicate, it has become a firm favourite.

I left in the wee small hours, with my palate renewed and an avowed intention to get some Lambic in for the summer - if we ever get one that is.
Posted by Tandleman at 10:40

That sounds like a great session, and I know exactly what you mean about needing a change sometimes. I've only got eyes for lager at the moment, having got aled out in the last few weeks.

Hey, of course we're going to get a summer, don't be so negative!

Couldn't agree more - nothing like a gueuze for the combination of palate cleanser and summer thirst quencher in one neat package.